Nice 1980”s ranch, no major issues until I got to checking appliances and electrical system. The following are items that I encountered. Can anyone give me a clue as to what may be going on.

[FONT=Arial]2. [/FONT]The compressor on the refrigerator did not operate, the interior light was on but dim, turning the units control knob to off caused the light to brighten to normal

[FONT=Arial]3. [/FONT]The burners on the range top would not reach higher than approximately 200 degrees and the oven and broiler elements did not heat up at all

[FONT=Arial]4. [/FONT]The a/c system would not respond at all, not even the circulation fan

[FONT=Arial]6. [/FONT]Turning off a 20 amp single pull breaker caused some lights to brighten; it also gave power to an outlet that was w/o power earlier when tested.

[FONT=Arial]8. [/FONT]Flipping the switches at the foyer and front porch light caused the sound of the dishwasher’s motor to change pitch.

[FONT=Arial]9. [/FONT]There were a few areas of handyman wiring but just a few added light fixtures in closets

I had a similar situation several years ago but not to this degree and just made a call for an electrician but now I’m curious.

I suspect the panel may be missing one of its hot legs.

You have a loose neutral

All looked okay in the panel except surge arrestor connected to screw and pierce through one hot feed, could what you suspect be visible? 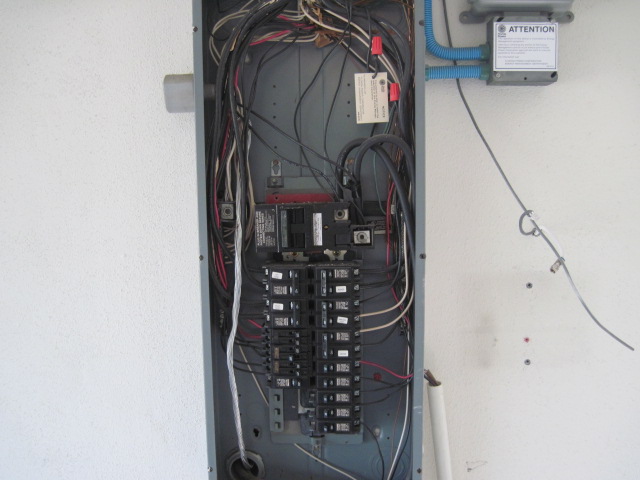 Bruce, I see you do radon testing, what method do you use. You’re not that far from me. Would you consider coming down this way if needed?

Sounds like you lost the neutral as Bruce stated. Could be at the meter where you cannot see it or somewhere else.

Robert, look at item #7. There are also issues like the A/C and the stove not working properly that a lost neutral would not have any effect.

One of the legs of 120v is not working - most likely a bad main breaker.

Some of the 120v circuits will work normally.

The 240v circuits will not work because there is no voltage potential between L1 and L2.

The line side of the main breaker will show 120v to ground and neutral, because of the 240v appliances that are on. If one were to read voltage from L1 to L2, the meter will read 0. (I know the SOP says we aren’t required to do this - I am comfortable with it).

Seen it dozens of times during my sentence working in apartments.

Robert, look at item #7. There are also issues like the A/C and the stove not working properly that a lost neutral would not have any effect.

After checking his list again I think that you’re correct. Since we see the panel cover has been removed and there has been extensive testing to the circuits wouldn’t a simple voltage check at the service be SOP?

Just want to say thanks for everyones help, I don’t get much time to get on here and talk but its great to have this message board when you need it.