Hi guys,
I’m a ‘newbie’ here, just working through he Internachi courses. Just finished the basic Electrical, and inspected my own panel.

I was hoping someone could verify that what I’m seeing here is correct?

Would just give a bit of piece of mind that I’m evaluating correctly.
Thanks!

Attached are photos from a residential service panel containing the main disconnect (main panel) that I inspected. Here is what I found: 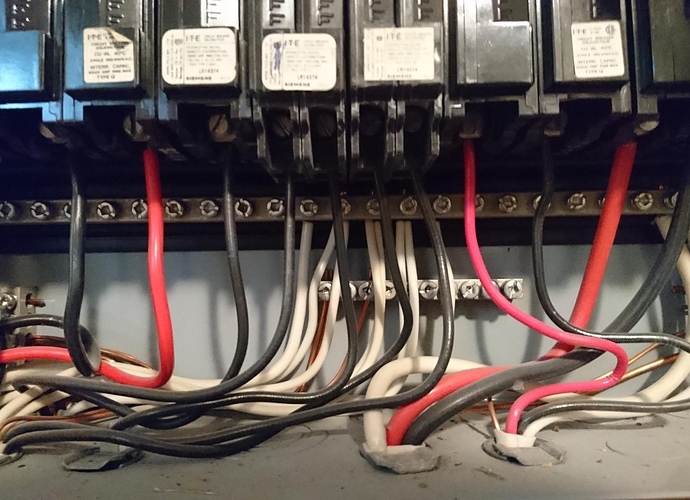 There is no reason an unused breaker needs to be removed and replaced with a blank.

The #14 with a 30 amp breaker may be correct if it serves a motor or compressor load. The neutral is not needed if the load is straight 240 volts.

Seeing the panel divider it tells me you are in Canada. You might want to put that in your profile.

Thanks Jim.
Couple of notes on that: I own this property so I happened to know that the unused breakers went to receptacles that were removed which is why I suggested they should be removed. If that wasnt the case, I see your point. I havent seen any info the the exceptions you mentioned for the 30 AMP circuit, but I`ll do some research on that for my own knowledge.

Are divided panels only used in Canada?

The NM on the lower right double pole breaker is 10AWG (orange). What’s the story with the popped out AFCI breaker?

The NM on the lower right double pole breaker is 10AWG (orange). What’s the story with the popped out AFCI breaker?

The circuit I was concerned about is the one right next to that with the black and white wire.
That breaker came out when I pulled off the dead front. I’m assuming it was very loose

The NM on the lower right double pole breaker is 10AWG

Canada has a cable with a red sheath with black and red conductors for 240 volt circuits.

Phil, a panel in the US does not have the guards over the service entrance conductors and lugs.