Hi folks! Just did an inspection today and came across what I think may be polybutylene plumbing. Before I send off the report, can someone take a look at the attached picture and let me know what you think? 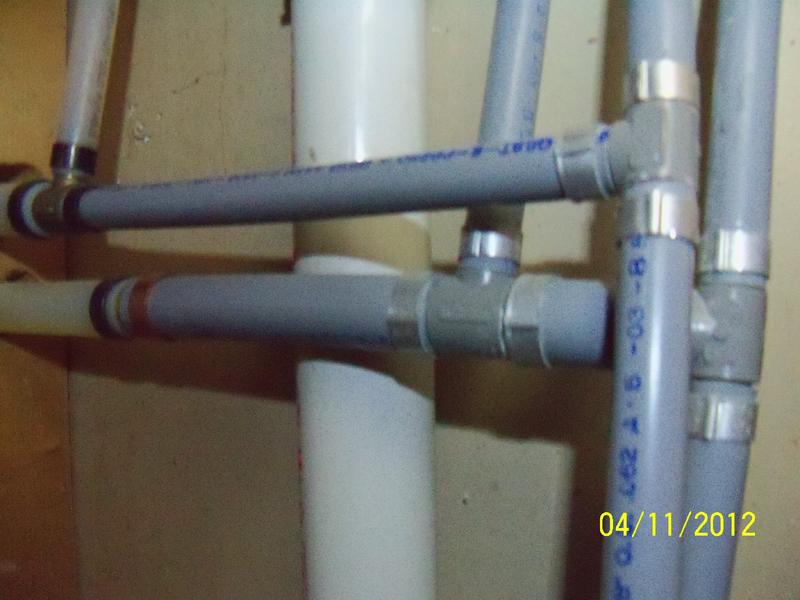 You are correct that is polybutylene

Thanks Gary! I thought as much, but I’m a newbie and didn’t want to get too excited. The disclosure listed the plumbing as PVC…not!
Thanks again,
Keith

Are the tees plastic? Can’t really tell but they look like it. None of it is good but the plastic tees are worse.

PB 2110
the fittings are of little consequence at this point…
recommend replacement of all PB.

Agree with Joseph this is the worst of the worst. The other 2 clear ones attached are OK it is PEX.

This is a good article for the new guys. Thanks for putting that one in Bryce.

This sight is really informative and talks alot about the problems and what to look for.
http://kitecplumbing.com/tag/what-part-of-kitec-is-defective/

On the left hand side of the pic you see a different type of (white) pipe spliced into the poly system. This is PEX piping which is connected to the poly system with a brass fitting and makes use of a stainless crimp fitting. Couple of points toward this end. First, the presence of PEX spliced into a poly system is a good indication that there was a prior poly leak, which was then repaired with the newer PEX piping. Second, some brass fittings (not limited to kitec) are susceptible to premature failure as a result of a process called dezincification (see http://www.sagewater.com/justfacts2.php). Other brass systems are claimed to fail or be expected to fail as a result of certain flaws in the manufacturing process. Lastly, there is a fair amount litigation surrounding brass components right now so it may be important to recommend that your client do some research on their own to further understand the issues. It looks like some folks have already mentioned the IPEX manufactured product known as IPEX, but there are other manufacturers of brass based fittings and components that are the target of litigation as a result of anticipated or existing premature failures.

For the purposes of transparency, it’s important that I point out that I work for a company that specializes in the turnkey replacement of defective and aged piping systems. With that, I hope my notes are helpful and good luck!

John thanks for Posting that info and yes it is very helpful we do see many change outs of the Poly and we have to look really good at the hidden areas. Pex to poly in my mind should not be done. The responsibility to the Plumber is to get rid of all the Poly period.