Always was under the impression that the secondary should be its own line in case the primary becomes clogged but cant find the rules on this. Primary is on the top and secondary coming from the pan is on the bottom both are connected to the same pipe. Thanks for any help with this 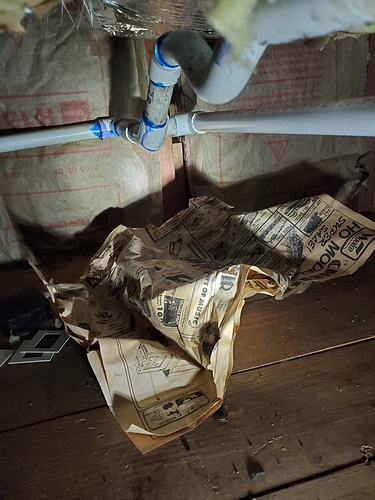 Just recommend that to your clients, Drew.

Also recommend a float or cutoff switch too if they don’t have one.

FYI, you have a what’s called a running or in-line trap, they are prone to failure of water seal and are not recommended, and may not be approved.

If the lines are not separated, it is not possible for the homeowner to know which aspect of the system is draining water, the condensate drain or the pan. If it is the pan, then the unit needs servicing. I agree that a float switch should be installed on attic air handlers too.

Drain lines and traps should be installed per the manufacturer’s installation requirements.

But is it functioning?
Did you observe it’s operation with a thermal camera?
What was the negative static pressure of the air handler?
Are you an AHJ Inspector?
So what are we really talking about here? “Opinions?”

When the equipment is serviced annually (at a minimum).

The secondary drain is not just for when the primary clogs up. It may be used when the negative static pressure elevates the condensate in the evaporator pan.

Generally, the secondary drain dumps into the auxiliary drain pan under the unit, which has it’s own pipe to an “Observable Location” evident to the home owner. I have seen drains through the ceiling above a shower or bath tub! Crazy but “Observable”. In cases where an auxiliary pan is not required (such as in a crawl space) the secondary drain is is piped to the Observable Loaction" (Code requirement for you AHJ’s). Leaking AHU’s into the crawl are to be found by the HVAC guy who shows up annually (yea right).

How things are not done, are usually circumvented by the things that should be done, but are not.

Testing negative pressures of the air handler, you joking, right? How many techs do that when they install an inline trap? are they there to monitor and measure it under all working and changing conditions? do they guarantee the trap will function under all conditions after they leave in writing? Does what the OP posted appear to you as job done by a competent and professional HVAC tech? LOL

I can make the same claim about everything such as missing or improperly located dirt legs, double lugging at terminals, missing supports under decks that haven’t collapsed yet, nailed deck ledgers, s-traps/drum/etc… used at other fixtures, missing bonding, wrong size wire, the list is long.

If you wish to make a claim that under certain conditions an inline trap will work as good as a p-trap, you be my guest, not here to stop you. I will bring it up and let the client decide if they want to change it or not.

How do you call something bad if it is working?

I mentioned how you can know if it is working or will work, didn’t say a Home Inspector should be doing it.
All you need to do is listen to the drain where it terminates and listen for it to gurgle.
You can’t call a running trap always bad just because you found some that don’t work because the installer put in too small of a return filter grill (which I would have already called out before I went into the attic or crawlspace).
Do you (a Home Inspector) want to know if it will work, you can take a pressure test. HI’s offer every other test under the sun. Just stick a tube in behind the filter and measure the pressure.
All traps are rated by pressure.

[quote=“srechkin, post:10, topic:160822”]
Does what the OP posted appear to you as job done by a competent and professional HVAC tech? LOL
[/quote] Specifically what are you looking at, or must I assume?

everything such as missing or improperly located dirt legs, double lugging at terminals, missing supports under decks that haven’t collapsed yet, nailed deck ledgers, s-traps/drum/etc… used at other fixtures, missing bonding, wrong size wire, the list is long.

Each and every one in your list is wrong because there is schedule for what it is supposed to be and was not. Looking at a running trap and opine it’s wrong without showing it does not meet the schedule for that part is wrong.

As for S-traps, I have tested every one I managed to come across to prove that they don’t in fact work. I found two. Both gurgled when draining. Those were the only two I reported because all of the others were installed before the code change, and they did in fact drain the trap and let sewer gas into the house. No special tools needed to determine they were not working. Any Inspector could make that determination.

Predicting the future that under some changing or adverse condition, or just over time something just might fail to operate is not in the Inspection Standards. We have enough stuff that really is wrong to talk about. Like you’ll let me talk about running traps, your free to put anything you want in your report. But you may be viewed as an inspector that likes to start unfounded arguments with trades people.