Had agent call me last week about inspecting a foreclosure; I advised them to make sure power and water were on prior to my arrival on Monday (2/9).

Upon arrival I found that the valve to the refrigerator ice maker box was leaking…matter of fact it had been leaking for at least 72 hours. Had the agent checked the fixtures prior to leaving the premises all this could have been avoided. Standing water in the kitchen with carpet and wood floors saturated throughout the house. Needless to say I shut off the water and notified both agents. Selling agent advised they would send a crew out to take care of same and put dehumidifiers and fans inside same. I advised I would be back in 5 days which would give the house ample time to dry out.

Went back this morning only to find that nothing had been done other than the agent turning on a ceiling fan… now fungi is forming on the baseboard and drywall as well as the wood floors are buckling.

How stupid can they be…what could have been taken care of for less than $300.00 will not only cost them the sale of the house but now over $5000.00 in flooring and general repairs. :shock: 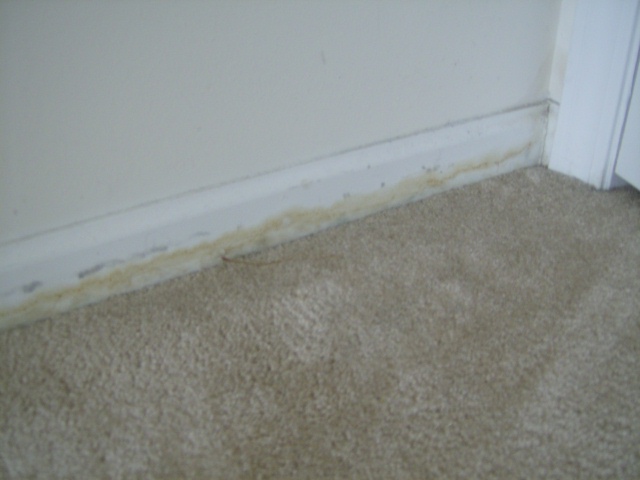 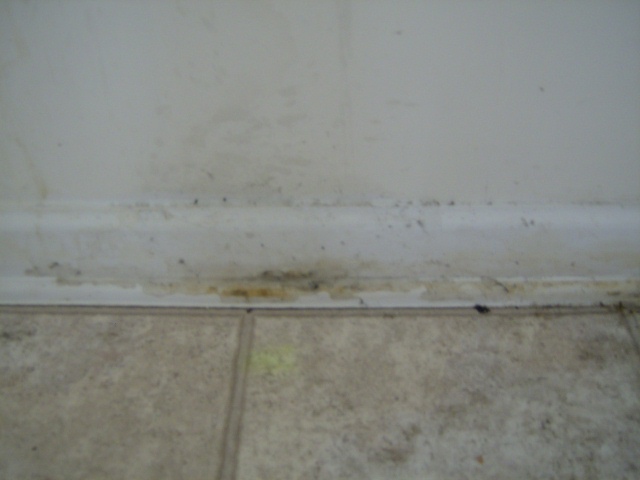 Good thing the water shut off didn’t break when you turned it off.

I requested all utilities to be on, and when I arrived the water was not turned on. Realtor called the owner, both said it was OK for me to turn on the water.:neutral:

I said, “No, it isn’t.” Owner came over–somewhat unhappy, and suggested I didn’t know anything about houses (probably true, but that’s not for her to decide).;-)

Older water valve…she turned it on…

…buyer pissed because he got most of the spray:(…we all went home while the owner waited for the water company to show up…

And I lived happily ever after.:D:D:D:D

And–oh, yeah…the sellers realtor called later and we discussed exactly why I have certain protocols. This adventure made it quite clear to her, and she thanked me.

Said she may beg out of handling the house for this owner, if she can.

The buyer called…said he wanted me for sure when he finds another house he’d be interested in buying.

And I’m still “happily ever after”.

Jae I love your stories. Had a the same request on my last inspection I looked at her and smiled and said “sorry, I don’t do valves”. She hasn’t sent me another job yet and I think I’ll live the rest of my life just as well if I never hear from her again lol.

I don’t turn valves to the right… only to the left:D

I don’t turn valves to the right… only to the left:D 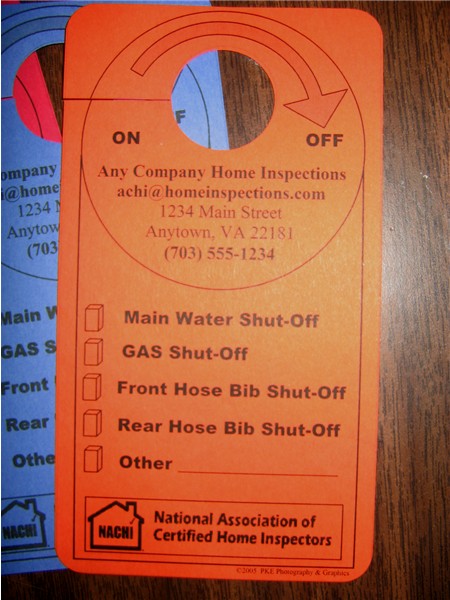 I had a similar type adventure. It was a foreclosure. I was the first onsite. When I walked up to the front door, I noticed a small river coming out of the sill plate area. I walked around to the right side of the house and saw an even bigger river. I called the agent I was working with and she came right over. She turned off the main water valve at the front elevation and let us in. The water level was about 3" over 90% of the house. She called the listing agent and he was resistant to get anyone there to remove the water, but he finally agreed. The first time home buyers showed up and freaked out. They had bid $15000.00 over the price the bank was asking to make sure they got the house. This particular listing agent will ask potential buyers of one of his listings to put the utilities in their name, since they may buy the house. In this case the agent I was working for said no way, she told the listing agent he had to to turn the utilities on in his name. The listing agent turned on the water at the street himself. I am guessing he did it and drove off. The supply line for the hall bath toilet broke off, and that was the source of the water. The city was contacted and it turns out they had a 26000 gallon discrepency on the meter reading. A restoration company was brought in and it ended up costing $50,000.00 to correct the damage. (flooring, walls, and cabinetry) Long story short, the house flooded two more times for various reasons. I made a total of seven trips to the property. The listing agent could never seem to have all of the utilities turned on at the same time. The buyers agent and myself were calling this the house from hell, we should be calling it the realtor from hell!

I advised I would be back in 5 days which would give the house ample time to dry out.

Why did you abort the inspection? Was it so severe that you couldn’t continue? Assuming that the agent mopped up the standing water, I think I would have proceeded.

Why did you abort the inspection? Was it so severe that you couldn’t continue? Assuming that the agent mopped up the standing water, I think I would have proceeded.

I didn’t necessarily abort the inspection but simply got to a point where safety was going to be an issue. The agent was not there at the time of the inspection and only showed up when I was on my way out the door. I was able to complete about 75 - 80% of the inspection…considering the current condition of the economy where the sale of any home is a plus, I felt it would be wise to give the seller (bank and their listing agency) ample time to take care of such issues instead of me going crazy on the summary page.

Unfortunately someone (the selling agent) dropped the ball and now in all likelihood the couple are backing out of the deal. I met with the buyers agent today who was picking my brain from a contractors standpoint on repair / replacement costs of those areas effected.

It is a really nice home, great location at an excellent price (40k - 50k below tax value) however I also understand there are too many other homes that they can go to without all the drama.

Good thing the water shut off didn’t break when you turned it off.

I forgot to tell you…there was large mound of fire ants at the street cutoff, including inside…that sucked.

I forgot to add my hazardous duty fee… 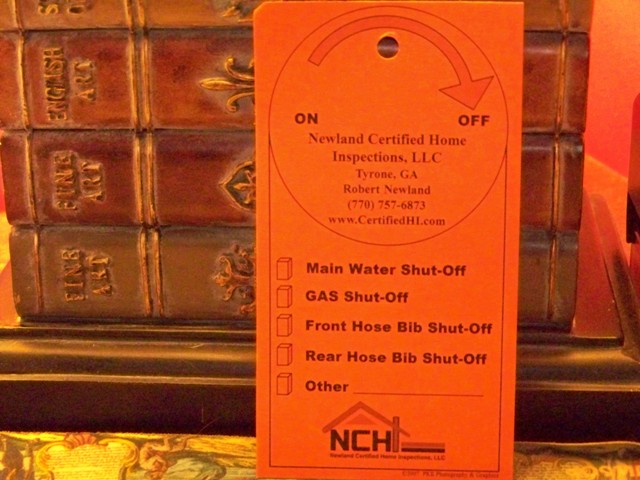 I always get a kick out of those…

Last time it happened to me a couple months ago, Power and Gas were on but no water… I looked and the curbstop was off.

I said it wasn’t OK for ME, but I could do partial inspection and return for trip charge, but water heater and others couldn’t be inspected. I wouldn’t have had time in next day or two for full inspection, but I could make time to go by and finish up. He called selling agent and was informed water would be turned on and water heater lit by end of day by plumber…OK

Well, despite having this worked out, Realtor (that was on site) let me know that He KNEW how to turn the curbstops on and got his pliers and such out while I was up in the attic…

By the time I came down (not that long after), the bathroom, hallway & laundry area were flooded by a leak that was apparently right @ slab/wall area with water running up to threshold for FireDoor to garage… about 1/2" of water in spots.

When I went to investigate what was going on, I spotted him on Cell phone, I quickly went out to truck and grabbed water key and shut curbstop off.

I showed him what had happened, indicated that it would be a good idea to get moving on this asap and such… he called the selling agent and was informed that they would get on it quick.

Finished up what I could, received phone calls from Seller… Selling Agent asking me to make a statement as to who turned on water as they were going to make buyers agent responsible for damage… I indicated that I would make a statement if I was forced to, but also let them know that if this was an active leak that water was shut off for, didn’t someone know? Wouldn’t this have happened to anyone that turned water on? In reality, if a plumber showed up, the water would have been turned off a bit quicker, but… who knows.

Anyways, went back 10 days later or so, wall had been cut open and patched in several areas… No elevated moisture readings, must have used de-humid and blowers. New carpet, all seemed well.

I wonder who paid? It wasn’t me, because I kept my hands off!