I’ve seen some weird stuff this week… here is another…

the wire once inside the home does not have the outer insulation covering, conduit… nothing… it travels 20-25 feet along the outer rim joist before entering the panel as 4 independent wires.

thanks to all the sparkies in advance… 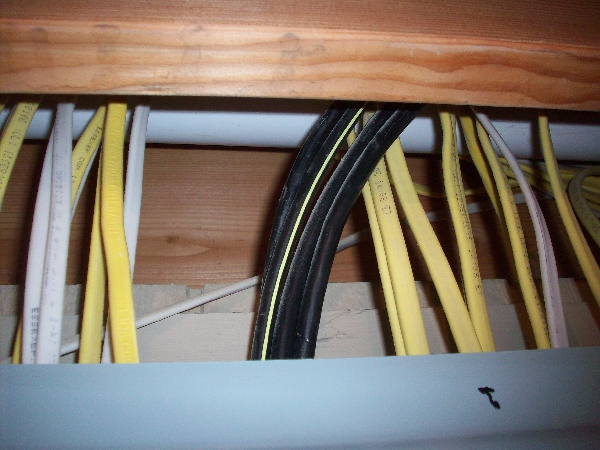 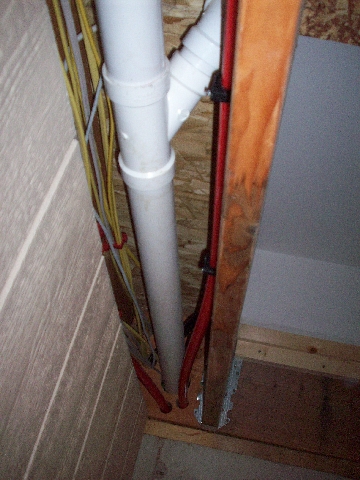 There should be a jacket on the 4 cables all the way up the the service panel.

Are those branch wires stapled to within 12 inches of the panel?

that is what i was thinking david…

that is what i was thinking david…

They need to be stapled to something within 12 inches of leaving the panel.

Yeah, that’s wrong as can be, and one of the most hazardous electrical pictures I’ve seen posed on the NACHI board in quite a while. Not only do individual conductors need to be contained in a raceway, but those conductors are called “URD” and aren’t even an NEC conductor type approved for interior wiring. In short, even if you put those conductors in a raceway as they need to be, the conductors themselves are the wrong type. That whole feeder situation needs completely redone.

Marc, aren’t these also the same insulation as USE? If so it is a smoke and flame issue. I also have problem with service conductors going any significant distance inside a home, no matter what the wiring method is.
I am on the side of the most strict intrepretation of 230.70(A)(1)

(1) Readily Accessible Location. The service disconnecting means shall be installed at a readily accessible location either outside of a building or structure or inside nearest the point of entrance of the service conductors.

I really like to see “back to back” installations. Seeing pictures of service conductors in a fault condition will make a believer out of you.

Does anyone have any good verbage for lacking AFCI in a home… ? If so please post… thanks… going to search the BB now…:mrgreen:

The thing you can’t emphasize enough is that there is no over current protection on service conductors and no practical way to disconnect them in a faulted condition. I would hit that harder on my report.
If you get a fault you will burn the insulation off that “20-25” feet of wire and if URD is like USE (direct burial service conductor wire) the products of combustion of this insulation are unsafe … not to mention the fire itself.
I am usually not the nervous Nelly here but 25’ of unprotected service cable scares the hell out of me, particularly when it is not even a wiring method listed for use inside. The only real fix is an outside disconnect and replacing the wire inside. (4 wire SER, separate neutral and ground in the panel). The lack of AFCIs pales in comparison. IMHO