Spiderwebs in the Main Service Panel

I came across a Zinco panel that had its deadfront sitting on the ground. The panel had spider webs all over its components. The enclosure was rusty. There were loose breakers. One tandem breaker was damaged. It has three 15 amp, two 20 amp, two 40 amp and two 30 amp tandem breakers and a 100 amp main breaker.

I have two unanswered questions-

What are your thoughts? Thanks guys! :-o 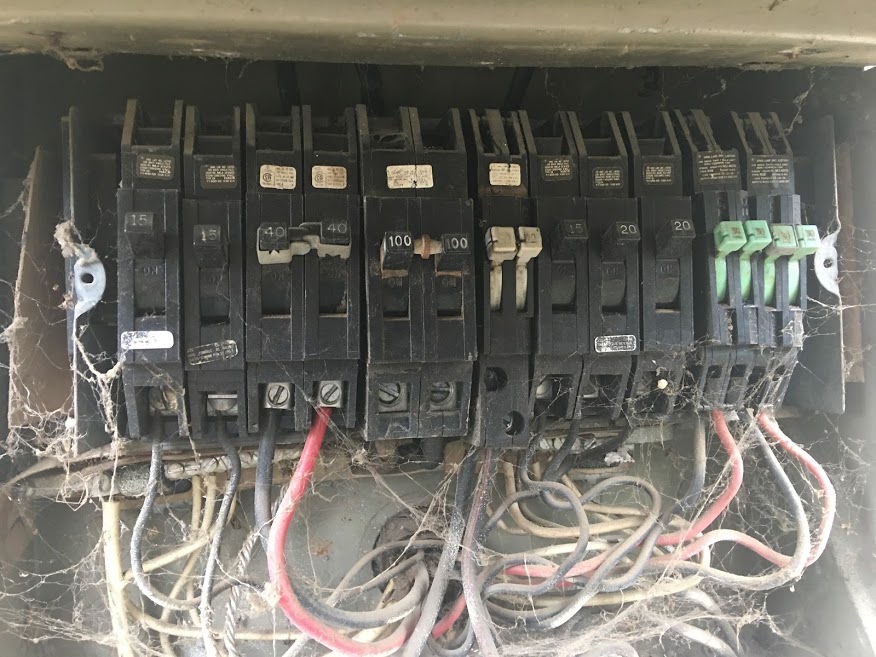 As Simon said, the total amperage of the breakers is not related to the amperage rating for the panel itself, disregard that.

I personally would not call out the spiderwebs.

As for the report narrative I would say something like: “The following issues were observed in the electrical panel that should be reviewed and corrected by a licensed professional: Loose and damaged breakers and rust/corrosion within the panel. Recommend corrections as needed.”

As well as a Zinsco comment if your software has one (hopefully).

Thanks for the information on the breakers. The amperage was something I have always wondered about and I needed a photo for the Advanced Electrical class. I don’t comment on what I don’t know, so the couple of unanswered concerns are now addressed. I do have Zinco and Federal Pacific narratives in my software. I’m actually loading more comments in my software, so now I know! Like GFCI protection, the realtors talk it down often. While I want their business, my focus is educating the buyer.

Just replace it with a reconditioned Sylvania… … …

Good to know! I’ll look further into that. It’s a reasonable remedy. Thanks Marc

Zinsco was a manufacturer of electrical distribution panels and circuit breakers, founded by Emile Martin Zinsmeyer and his son Martin Emile Zinsmeyer in the early 1930s. Frank Adam Electric, a manufacturer of electrical panels and circuit breakers, was founded in 1891 as part of the Blacker and Adam Watch Company in St. Louis, Missouri. In 1928, a young sales manager named Emile Zinsmeyer took charge of Frank Adam Electric's western division in Los Angeles. In the latter part of the Great Depre...

Zinsco electrical equipment is considered obsolete, due to a design flaw in which the circuit breaker’s connection to the bus bar becomes loose, causing arcing and subsequent overheating.
Long term exposure to this heat can cause the breaker to fuse to the bus bar, making it impossible to remove. Even worse, it can cause the breaker’s contacts to fuse together, thus preventing the breaker from tripping even in an over current situation, thereby causing a potential fire hazard

This is a video of a test we performed on a Zinsco Breaker. We put 60 amps on a 20 amp breaker and it failed to trip. Within 60 seconds the romex caught on fire and got to over 500 degrees

My uncle used to install auto alarms and stereos. He always told me to keep the SMOKE in the wires, and to never let the smoke out. Makes sense to me!