On todays inspection, the sump pump had no inlet pipes, cut outs coming into the sump? How is the water going to get into the sump? I think the builder didn’t connect the piping?
Any comments?

Gary,
What was the pit material? Were the walls perforated? Was there water in the pit?

No water. Just a solid piece of plastic.

Gary,
Write er up!! If it is new construction, there definitely needs to be an explination by the contractor as to how the foundation drainage system is intended to function. If there is natural gravity drainage from the site, then this may be part of a backup rough-in installation. Like you however, I would still expect to see some pipe connections.

No water. Just a solid piece of plastic.

A solid bucket with no holes whatsoever?

Sounds incomplete to me…

I agree there’s something wrong here. I have yet to see a sump pump w/o a drain tube/pipe in a plastic sump well. Call it out. Report on what you see. Just out of curiosity was this on the same home (35 yrs. old) you inspected the other day? Did it look like it had been installed recently? New or Used? What I am getting at is this may have been a home owner project that became too much for them to complete. I have ran into this situation before. Homeowner had a water pipe break inside the basement and decided that it would be a good idea to try and install a sump pump themselves in their basement just in case this were to happen again and then relized they got in a little over thier heads and was left incomplete. Sounds just about the same as the one your looking at. If you have a pic. post it and we can take a look at it.

They may have the bottom of the liner out and put in small rock?

On todays inspection, the sump pump had no inlet pipes, cut outs coming into the sump? How is the water going to get into the sump? I think the builder didn’t connect the piping?
Any comments?

Was this pump indeed for foundation drainage, or was it maybe for the washing machine?

Here is a pic

Gary,
Looks like they put it in for surface drainage. Looks like its been dry for a while, even with the amount of water we’ve had.

I would recommend they have a plumber come out and take a look at it or the builder if it’s a newer house. The pipe may be there but someone forgot to cut out the hole for it. Unless as mentioned above it may be an ejector pit for the washing machine to drain into.

This is not for the washer. Its in another location of the home.

Gary,
Looks like they put it in for surface drainage. Looks like its been dry for a while, even with the amount of water we’ve had.

Gary, I would have to agree agree with Jack on this one this would be used as a surface drain only, if not you would have holes in the side or bottom of the box for inlets for drains or ground water. Here are some pics to show you what I mean. I hope this helps. 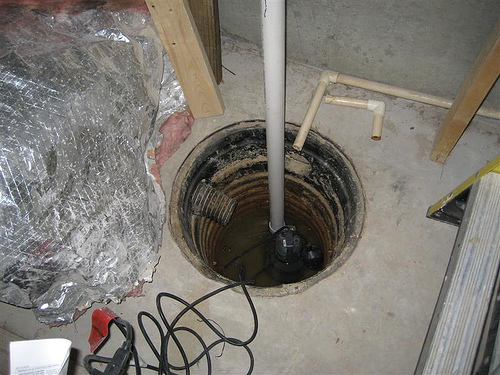 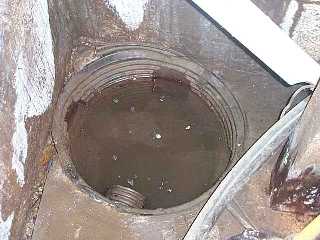 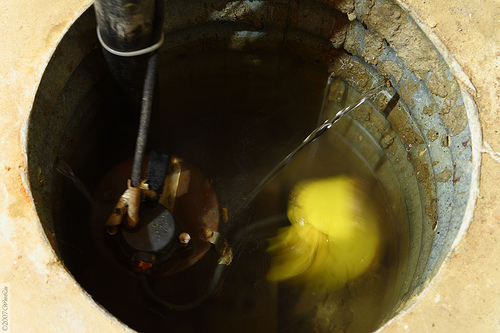 Tim
There is a surface drain already in this room, ac condensation removal.

This is appears to be for footer/perimeter drains.

Tim
There is a surface drain already in this room, ac condensation removal.

This is appears to be for footer/perimeter drains.

hmmmm…??? Clearify if you could… Is there a Condensation pump for the a/c and a Surface drain (meaning another sump pump)? Is there two sump pumps then??? If so the only thing I could suggest doing (Not you of Course) is to pull the pump, dig out the gravel and debris at the bottom of the well, and see if there are holes drilled or molded into the bottom or bottom edge of the sump well. This will be the only way to tell if this was intended for ground water. Same with the other one if there is one. I personally find it a little strange to have two sump pumps though. Unless the floor looks like this /\ .

One sump pump only. The surface drain is hooked up to city sewer.
The plastic linner is solid, no holes,etc. I think they forgot to install pipe for footers.

Gotcha!!! Depending on the age of the home, It may not have been required to have drain tiles under or around the basement of the home. In this case all you can do is report on what you see. What I see in this pic. is a sump pump acting as a surface drain. If this is a newer home you may want to refer them to the builder or plumber to futher investigate. You need to be careful what you say, because if you tell them there may be drain tiles there they may start cutting holes in the sump well, and if there ends up being no drain tiles there, who are they going to blame. This is why I say to report on what you see and only what you see. You can advise them of the purpose of sump pumps and how they operate, but I would not say that there may be drain tiles going to or not going to this.

First of all, there shouldn’t be any dirt next to the pump, period…this’ll cause problems. Secondly, that piece of wood in that sump hole appears to have never gotten wet., so it appears to be a dry well. And thirdly, I don’t see any water lines on the inside of that liner, so I would imagine that water does not accumulate in this sump hole the builder installed this sump just as a precautionary measure, in case it was needed.

I report all all sump pump activity. If I had this one, my report would state that the sump float was not tested due to “NO WATER”.