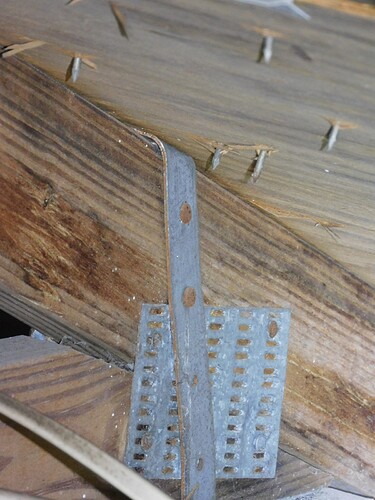 DSCN28721200×1600 437 KB
There’s quite a bit of “less than ethical” Wind Mit inspections going on in Florida - from my viewpoint anyways. Since our insurance industry in Florida is in turmoil, there is a tremendous amount of clients requesting wind mits and four points and people are upset.

The picture is of a wind mit done this morning (the strap does not wrap over the top to the other side). I let the client know this will be classifies as a toe nail according to the form and that he may want to have the third nail added as there are several companies in the area that do a great job of it and it would probably be worth the investment to get the discount. He then produced 2 different reports with very similar pictures but classified them as 3 nails assuming the third nail was was at the top of the truss. He’s been getting the discount for years.

I told him I was sorry but I can’t include “unseen” nails.

FYI - the same company had issued both inspections previously but with different inspectors. They also gave it the home top rating for opening protection even though 2 openings weren’t protected.

Agreed! I hate having to tell clients that a credit they’ve been getting isn’t valid.

Once wind mitigation re-inspections started happening I always requested from the customer a copy of the previous document if it were available, by studying it I could see what discounts the client was previously receiving… Had this one showed up as being credited for wraps I would inform the client that if I were writing the report they would be credited for toe nail only drastically changing their value. At this point it was common for me to suggest that the client go back to their original inspector for their re-inspection as they wouldn’t be happy with my evaluation.

I have done the same thing many times. After viewing these reports I tell the potential client, just have the previous inspection company renew the report. If I do it it’s going to cost you about $1,500 in discounts.