Thought I would share this zinsco remote distribution panel from yesterday’s inspection. Note the obvious mixing of grounds and neutrals, but also notice the use of the ground wire for bonding with the result of leaving the ground wire acting as the neutral. Neutral/ground bar not bonded to panel. Double tap on breaker. Also bottom of panel was 24" above the walking surface. Missing knock-outs and cover screws. As if being an old Zinsco wasn’t enough!

I as an Electrician ( wearing that hat today ) want to THANK you for finding crap like this. When the argument comes up should HI’s be in panels…I think so 100%…we need you finding these things…bravo!

That is one of the worst remote panels I have ever seen, the fact that is a Zinsco is just the icing on the cake.

Here is a nice little image of a Zinsco Bar for ya…notice the ARC on the bar itself…those Aluminum bars have issues…Once the contact GAP is weakened…and it does not make good connection…ARC happens…and of course they PIT easy as well. Atleast they make replacement bars now…lol…Like I would replace one… 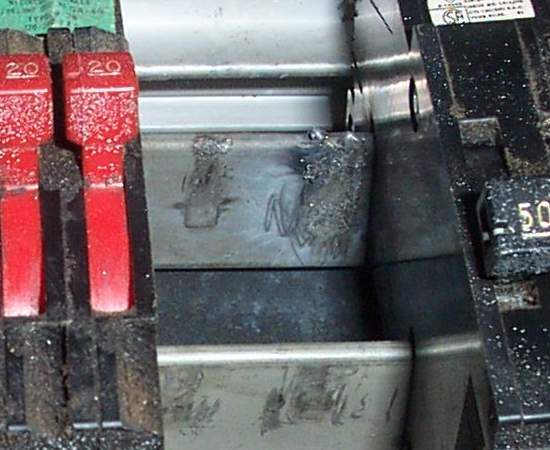