Trying to write a general email back to the buyers agent so she can provide to the listing side to get the proper person on site to look at this.

This was written up in my report as a broken truss, potential structural issue, have a licensed structural engineer or contractor evaluate and offer an estimate for repair, etc.

So the “contractor” comes out recently and says it was caused by the installation of the whole house fan :shock: (which is no where near the truss, on a different level of the attic, and would have never caused that damage IMO). Essentially stating that this was not a big issue.

So first off, is the proper name for this a “Warren” truss?

Looks to me like the rafter above broke the truss, does it not? 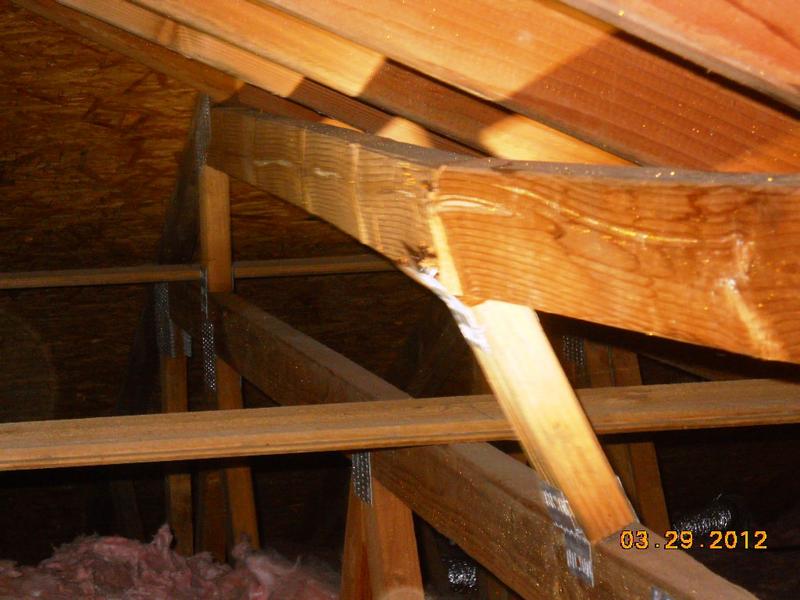 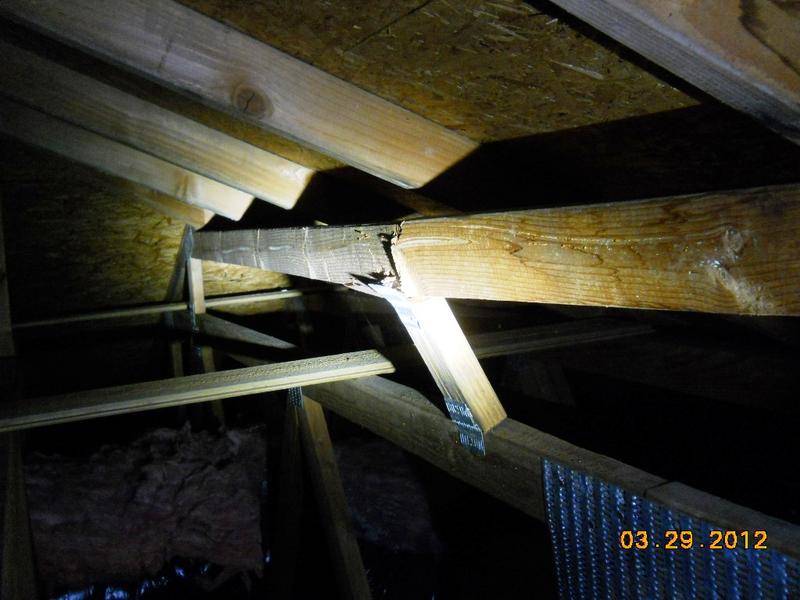 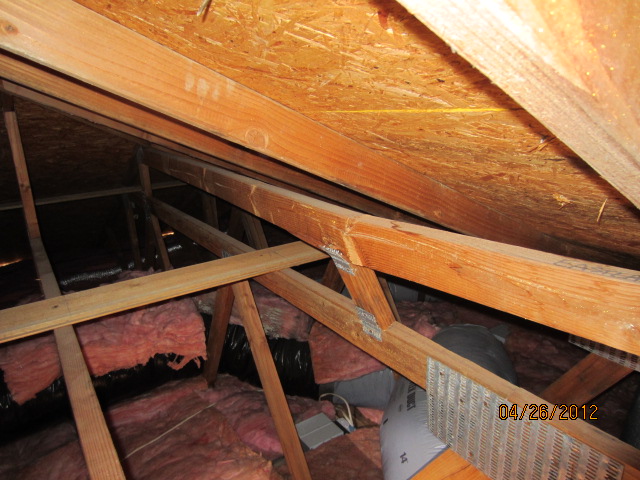 That’s several rafters that should be and aren’t being supported by the paralell chord of a truss. Then describe as _____ part of the attic, or whatever.

Makes for a nice dip in the roof in near future, especially if it’s tile.

I don’t think he saw the pic before he went out there, it needs to be fixed for sure. Any contractor that see’s the damage will indicate as such.

Also, it’s common for a DIY’er or a Handyman to cut the bottom chord of a truss when installing a whole house fan… is that possible?

I’d probably call it a girder truss but no matter. If their guy has viewed pics and on-site and can’t understand the problem, a qualified professional (like you said, a structural engineer)should be called.

Also, it’s common for a DIY’er or a Handyman to cut the bottom chord of a truss when installing a whole house fan… is that possible?

It’s in a different area of the attic but parallel to this area I suppose. There are two levels of the attic, this is upper while the fan is on the lower.

This was written up in my report as a broken truss, potential structural issue, have a licensed structural engineer or contractor evaluate and offer an estimate for repair, etc…

So first off, is the proper name for this a “Warren” truss?

Second, don’t concern yourself with the design. While this may be a variation of the Warren truss, that’s like naming the brand of an AC or Water Heater to recommend repairs.

And last, don’t concern yourself with the cause of the damage. The engineer will evaluate the entire situation and design the appropriate repair.

Here is my standard;

There is a broken truss in the attic. Any repairs, modifications or alterations to a truss system require design and approval from a structural engineer. Therefore, you should have the damaged truss examined by an engineer to determine the corrections that will be necessary.

Here’s mine from today… 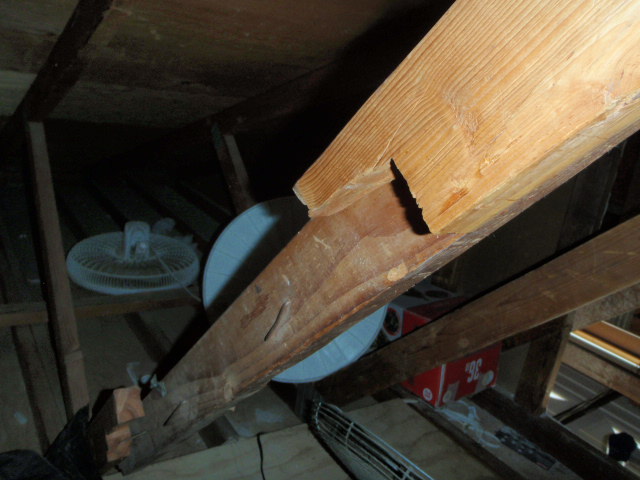 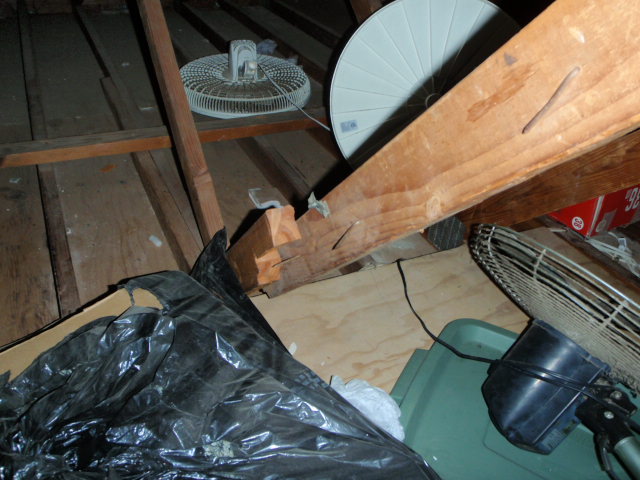 Doh! Were those bent over nails once nailed into something? Having a hard time figuring out what’s going on there. Maybe just a scrap piece of wood that they sorta-sistered in? Looks like one hot mess no matter. 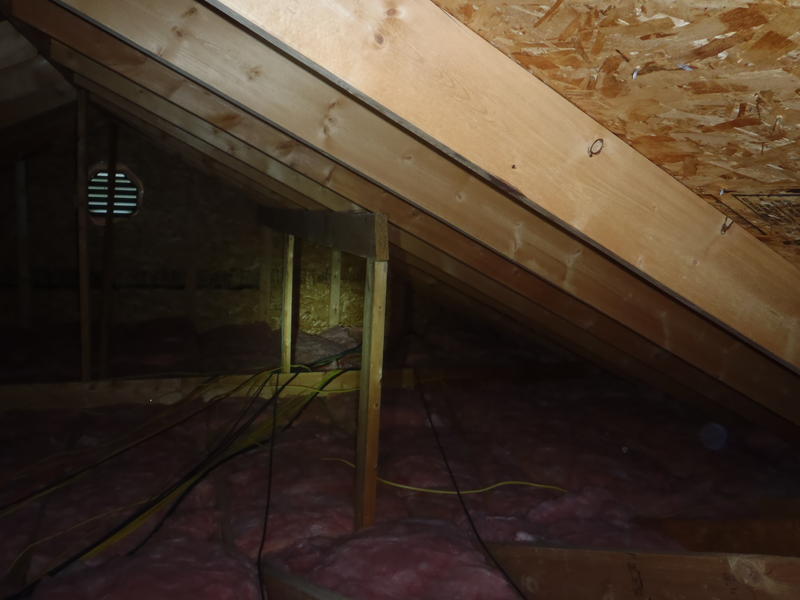 Nice one Sean. I’ll double-down in the crawl with a cracked foundation wall 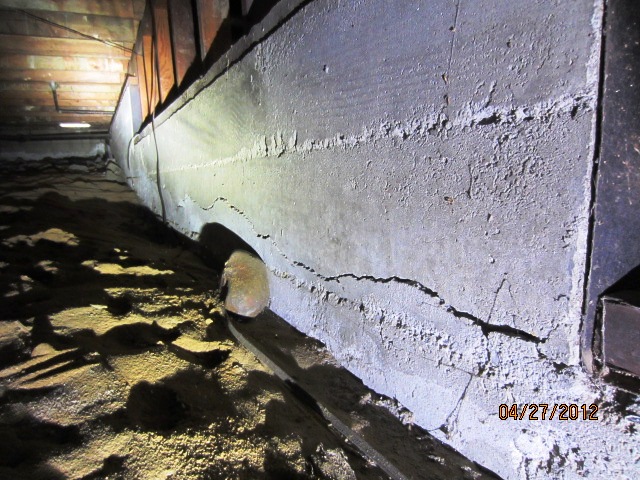 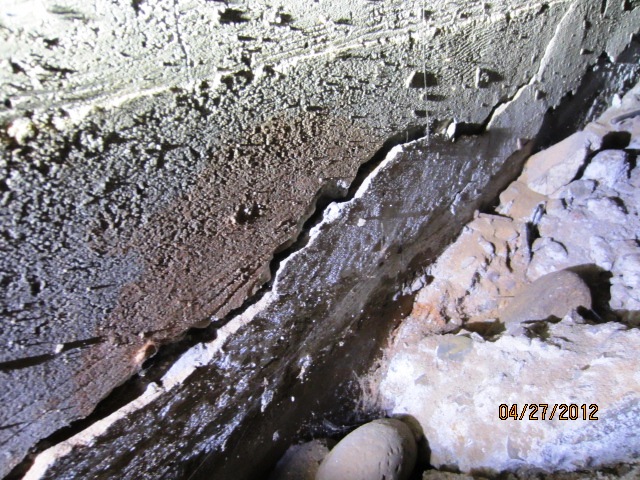 It is acting as a knew wall isn.t it.
The rafters are OK.
Am I seeing it wrong?

Thanks Sean. I thought I was looking at it correctly.

That broken member does not appear to be part of the original truss design. First of all it beaks all the basic rules of truss construction. Is it possible the contractor added that member in the field?

From my experience, it’s part of a truss/lumber MFR provided package. Where rafters sitting on a parallel chord or the chord itself may not be trusses per se, the package would be part of the your Truss Calcs/docs attached to the plans.

I see that type of construction all the time on our west coast. Your trusses and the pre-cut hips/fills come right from the Truss MFG. Labeled too. A1-A(x) and again, part of the truss documentation.

Second of all, you were wrong to recommend a “contractor”. The only qualified individual to design a repair to a truss is a licensed engineer.

“One or more attic trusses were broken or cut. Trusses are engineered structural members and any repair or modification should meet the manufacturer’s specifications or else be conducted according to the specifications of a licensed professional engineer. Stamped design drawings should exist demonstrating repairs approved by a licensed engineer. We suggest that you consult with the manufacturer of the trusses or a professional engineer and have repairs preformed as they deem necessary. Note: a recommendation is to attach design drawings to the truss to substantiate repairs when the house is sold in the future.”

Mr. Spargo.
Even if that is the case it is placed in the wrong direction.

Look at how that engineered member is loaded in that placement.
It is not meant to accept horizontal loading.
I suspect up to a 45% load live or dead will shear those manufacture fasteners and or break the wooden members as they have.

If the knee-wall was set back at a 30%-45% degree angle depending on the deck slope and make contact at a 90% angle than it might work.
I only say might because can not see the entire space.
Me thinks engineering may have been over extended.:roll:

Placed in the wrong direction? Obviously, running the member parallel to the rafter would be point less. I’m assuming you mean the angle, comparable to other components.

It’s meant to be perpendicular, like a purlin, but not one. More like a knee wall or girder.

The rafters that you see are jack rafters tied to the hip rafter, or a small piece of ridge, and the parallel chord (horizontal) is an intersecting member, simply to break up the span. While it’s not perfect… very common.

Thank you.
Just waking up.
Yes as expressed before a knee-wall.
The girder part I do not agree with but that’s me.
Yes my narrative has to be sharpened.
That you.

Yes again Robert I would agree as long as the Knee-wall is close to a load bearing wall underneath and properly pinned.

You would think that when it was originally built, there would have been more bracing and then, strapping of some sort to the top chords of the truss.
A structural engineer would put down on paper what should be done to correct this.

On another note, did you make mention of the failed Owl-Flex duct work?