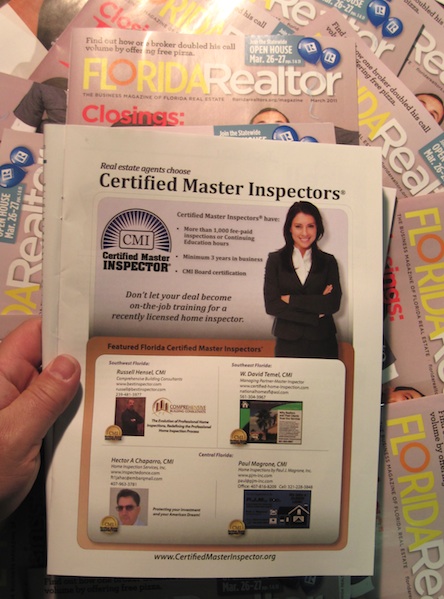 I thought CMI and INACHI were separate?

And why the adds for CMI’s and not INACHI Inspectors?

Since CMI crosses all organization boundaries, does this mean that we are advertising for ASHI or NAHI members that are CMI ?

And why the adds for CMI’s and not INACHI Inspectors?

Since CMI crosses all organization boundaries, does this mean that we are advertising for ASHI or NAHI members that are CMI ?

Yes. There is no rule at the MICB that prevents non-InterNACHI CMIs from running an ad.

Once again it is a great Advertisement. Yet, I wonder how many would have invested $1,000 on a promise that you would be in there. We didn’t know of there were going to be 2 or 200 people in the ad. So, 4 of us took a leap of faith and we hit some pay dirt (how much, I don’t know yet, if any at all).

What stops 5 or 6 of you getting together and doing your own Ad? I plan on doing that in the near future. Because from what I see, it will be WAY more than 4 next time around.

When this was being offered, I did not hear any or very few complaints. I think now that the product is done, people are sad they did not jump on board. But Nick has given me an idea and I will run with it.

Not only am I getting together for advertising, I plan on starting a “Mastermind” group of my own. Getting about 10 people from around the state with like goals and business models and the strive for MORE MORE MORE…Not more than ONE inspector from a given area so there is no direct competition. We shall see what happens…

Single handed I can do my share, with the help of others of like mind and goals…I honestly think we can take over a nice portion of the states inspections…

Good luck with the advertisement. Hope you will post any perceived results.

My in-laws are wintering at Indian Creek in Fort Meyers. Next time I’m in the area maybe I’ll look you up.

I have CMI certification from MICRO. But I am willing to get together as being on a Florida list and splitting costs for marketing this. But lets see how the turnout was on the ones sent out already.

LMAO…this is EXACTLY what I am talking about. Everyone complains about this and that and yet they do not want to risk anything. Wait and see if this works out, if I were you I would wait a year or two just to be sure. When you decide to pull the trigger and do it, we will be onto something bigger and better. Playing catch up is no way to market.

Upon pondering this let me ask some simple questions.

Who was the first man to cross the trans atlantic solo?

Who was the first man to walk on the moon?

Now with those simple questions answered, answer these

Leadership has its privledges. You can either do ONE of two things in any chosen field your active in. You can lead or follow. Which do you do?

Then go the Featured Inspectors Message Board and talk about it there. :twisted:

Well in that case, well done and good luck.

Hopefully the Ad copy is written a little more clearly than this Thread Title.

Got a better picture. I Got the idea BUT not a real good blow-up of the ad.

Got a better picture. I Got the idea BUT not a real good blow-up of the ad.

I have the top half here.

The agent was reading the magazine at my first inspection today. I told him that we had an ad in there this month.

The agent was reading the magazine at my first inspection today.

Anybody got the bottom half?

Anybody got the bottom half?