Do you See the Bond?

New home, did not see where the panel was bonded, am I missing something? 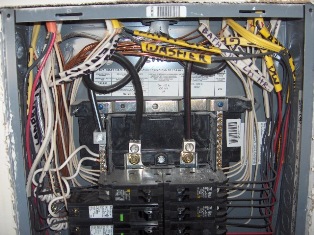 Tim I could do with a larger picture but it appears that the panel bond (s) are the 2 green screws on the neutral bridge at the very top of the panel.

Tim I could do with a larger picture but it appears that the panel bond (s) are the 2 green screws on the neutral bridge at the very top of the panel.

what are the bare copper wires at the top left of the panel?

do they run from the neutral bus to the plumbing system?

bigger pic would be nice.

I agree.
Why are you looking for a bond in a sub-panel?

BTW- The bond hole is the large (1/4") hole in the center of that bar between the neutral bars. Not the small green screws.

Agreed…and the hole in the middle of the buss is not bonded…because in fact it is a sub panel based on its MLO setup.

I have to say…I simply HATE when electricians leave labeled romex in the boxes…to me it is unprofessional…fine for the rough in…but then when you come to label the panel…remove the freakin things…nasty if you ask me.

See, now I do like to leave small pieces of NM sheath as wire labels. Much smaller then in the pic though. Typically about 1" long. And usually though only if it is a flush panel. That or I leave the sheath a bit long inside the panel and label right there.
If it is a surface panel I label the wire with a NEW Sharpie just before it enters the panel.
I do NOT like to reply simply on the panel directory alone. Even at the complete end of the job.

lol…Oh thats just sloppy Peter…;)…naw…to all his own but heck in that image…could have done a little better job at evening out the wiring and being neat about it…

ofcourse they would say I am insane anyway…so go figure !

I agree. Like I said, the pieces I might leave are way smaller and neater than that panel.
I like them because no matter who messes with, and rearranges the panel, the circuits themselves are always labeled. Not just the breakers.

I am a freak …makes me insane…

See… a little creative editing and now we see Paul says he is a freak, and insane.

Nothing we did not already suspect.