hey guys,
i am uploading a picture of the draw inspection report form that i am going to use for this company.
my question is, what do the second and third columns figures mean ?
the columns in question are Total and % ??
are they samples of previous data ?

i thought when they asked for percentage of work done, that would be just it…, a percentage on each item.
but now this has me wondering.

thanks for your help
kevin rea 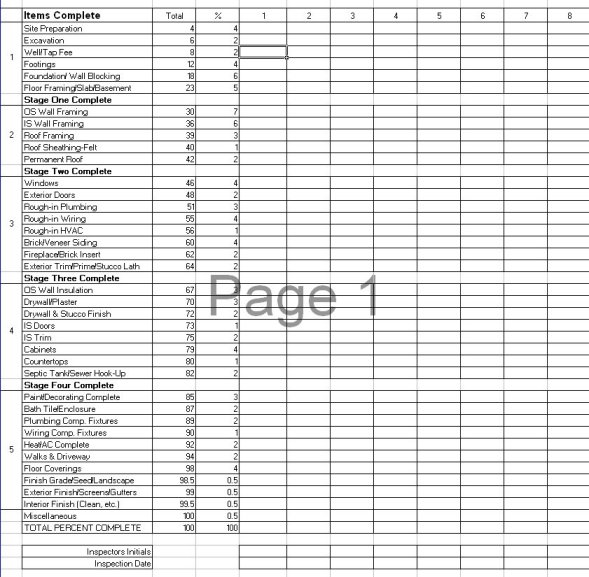 Each completed item represents a portion of the total completion of the build.

When Stage 1 is 100% complete, this represents 23% completion of the entire project. Stages are broken down into line items so that portions of other stages can be calculated, even if a particular stage has not been completed.

Does that make sense?

it kind of makes sense.

so, under each line item, do i put the percentage of completion up to 100%, or only up to the number quoted in the Total or % column ?

let’s take another line…
under floor framing/slab/basement: the first column is 23 and the second column is 5, does that mean that it is 21% complete ?

Now lets say (for example) these items are also 100% complete;

Obviously, other items would need to be completed in order to have these, but this is just an example.

Typically, round numbers are fine, so you would add another 7% bringing the total job completion to 20%

It’s really simple once it clicks.

so, in the column number 1 , that is now blank,
would i be entering the actual percentage completion for that item such as IS Doors, 70 % , for 70% done ?

They’re looking for the percentage complete at each particular line item, so they can pay on that item.

thanks for your help Jeff.