Although MAHI (State org of Ashi people) and the Ashi chapters keep telling that they are not looking into getting legislation in front of the lawmakers, actions definitely speak louder than their words. Note what representative from the eastern side of the state just happen to be at the booth.:roll:

Expect that the bill will be introduced very early in the upcoming session. Are you guys ready to write your reports to the Ashi Standards? 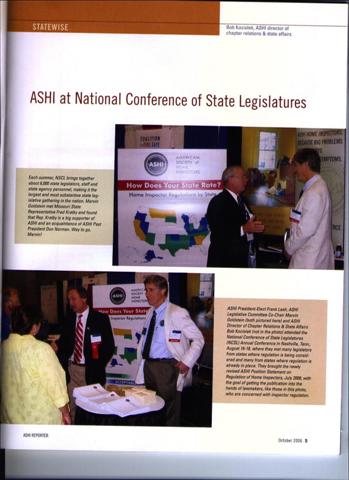 Jim, now you’ll have something to do…

hey ya’ll this was given to me by a University of missouri exstenstion office employee.it pertains to legislation in the works for Missouri.
EDavis
Southwest Missouri

Looks like we at least got listed in the bill. I know you guys dont want legislation, but I see no indication of an ASHI-stacked model from what Elizabeth posted…

Looks like we at least got listed in the bill. I know you guys dont want legislation, but I see no indication of an ASHI-stacked model from what Elizabeth posted…

I did not return to Missouri until just this past summer, Joe, but I think that this January 2006 bill may have been/be the target for some behind-the-scenes ASHIfication, if you know what I mean.

Like we have discussed in other threads, the bill can go into committee looking pretty good, but —

That “Bill” was an attempt by the other org MAREI (white hats) to introduce first a fair type of legislation. It was shot down by the other group for several reasons, such as background checks for pedifiles, no teeth in removing the undesirable types, the non preferred test and a few other reasons. It really was doomed when it hit the floor.

Actually what it accomplished was that the A group was totally caught flat footed, opened jawed and wondering. Backroom information was telling us another story and another Bill would have been introduced a few weeks later. The same stories are being told this year, absolutely no interest or need for legislation in Missouri, but hey Mr. Realtor, Mr Representative, Mr Home Builder and Mr Attorney if you feel that the need for legislation is real, we will be willing to work with you and get things done.

Their coffers have been reloaded, they have a plan and a force for the push. Look at that map, the white states are the targets, if you’re in a white one you’re on target list. Hello Ohio, Michigan, Kansas, Washington and the rest of you. Are you ready to change to a different SOP?

HB-1589 was last years Bill put together by a coalition of inspectors from all groups (NACHI, ASHI, NAHI & Unaffiliated). It was run up the pole by MAREI (Missouri Association of Real Estate Inspectors) because they had discovered a legislator around Bolivar Missouri was working on his own licensing Bill.

The one he was playing with was heavily top-sided or slanted in 1 direction favoring 1 group. He was a retired sherriff in a small town and if I remember the story his father (a builder) passed away and a HI did an inspection on his dads house and reported a bunch of problems. The way we were told this was an insult to his dad, so …

It amazes me that the legislature will consider licensing for those who inspect construction when the ones who do the constructing aren’t required to be licensed in 70% of the state or so.

You got it on the head.

Apparently no one understands that the rest of the state motto “Missouri the Show Me State” is; “Show me a polititian that once bought; stays bought”…

Show me state, as in show me the way out?