I have an opportunity to get a quantity of these nice Keenwin LED flashlights so I want to see how many would be interested in buying some.
I’m replacing all four of my Streamlight Ultrastingers with just two of these.

Prices are $85 for the RC40 and $95 for the RC50 plus shipping to your location and includes the battery. These retail for much more. You don’t even need a separate charger for these lights so that is a savings over many other non-USB lights.

I own the RC50, it has a USB charger, uses one 18650 battery and is rated for 680 lumens. It has three brightness levels and all done with one hand operation. The lights use the Cree XM-L led which is very bright. They also come in a gift/display box with spare switch cover and spare o-rings.

The RC40 is fine for home inspections but with the small price difference you should get the RC50. I recommend getting two to save on shipping.

2 year warranty with 30 day free replacement, see Keenwin warranty for details. These are high end lights, not cheap junk and the warranty is handled in the US if it’s even needed. These lights are not overdriven and do not get real warm like many others, very high tech circuits etc. 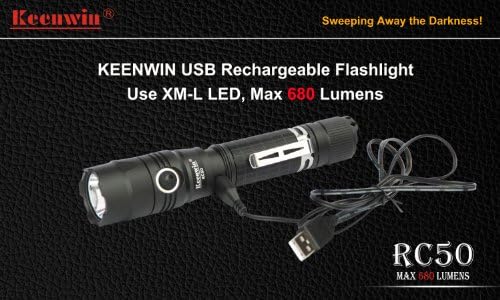 Its time to replace those power hog ultrastingers with the yellow tint light and expensive batteries. The Keenwin comes with a battery and they are readily available for $5 to $8 apiece.

Post here or send me an email to bruceaking@bellsouth.net
thanks!

No Connection to seller but I switched to a CREE powered flashlight (fenix tk35) and would never go back to a streamlight again–their batteries are NICD garbage that are way overpriced. Make the switch you won’t be sorry.

I purchased several RC 50’s for our inspectors. They all love them.

Incandescent flashlights will soon go the way of film cameras. The new crop of LED lights are vastly superior. The CREE XM-L is an outstanding emitter.

I purchase cree flashlights from china through ebay for $20-30 (free shipping) which are two or three times the 680 lumens listed above. I had a client who saw them and immediately recognized them from his time working in China. He said they are everywhere in China. America, especially Streamlight, is behind the times on LED flashlights. They are definitely the future.

Hi Bruce, I am curious…are you going into the internet flashlight business? There are 100’s if not 1000’s of flashlights on sale via the internet. How did you choose this one.

Hi Bruce, I am curious…are you going into the internet flashlight business? There are 100’s if not 1000’s of flashlights on sale via the internet. How did you choose this one.

I was given one of these as a gift and started researching LED lights since the timing was perfect, I was about to transistion to high quality LED lights anyway.

I just ordered a bunch of these to supply interested nachi members, friends and family since the quality is way beyond the ebay lights. Most lights are rated way higher than what they really produce, they do not have a USB charging port and do not have a two year warranty so anyone that knows about LED flashlights would want one of these.

The cheap lights are not worth the shipping cost to send it back so they are disposable.

I ordered a cheap ebay light to do some comparisons with and will post the pictures soon.

Damn I need to catch up on this stuff.
I was happy with 180 lumen s but ready for the big boys .
Time to research.

Damn I need to catch up on this stuff.
I was happy with 180 lumen s but ready for the big boys .
Time to research.

These links are a good start…

These links are a good start…

Thanks.
Would like to find one with lifetime warranty.
My present one has that through Menards.
Need more lumens however and longer battery.
The thing sucks AA like no tomorrow.

Look at lights that use the 18650 battery, plenty of light with single cell and XM-L led.
You can get protected 18650 batteries that have a circuit on one end to prevent over discharge that harms the cell. Some lights, like mine, have circuits to prevent killing the battery.

Don’t get caught up in chasing lights that claim to be over 1000 lumens.
If you actually get one that is that bright it will wear down the battery faster or will require more than one battery which will cause you to end up with a much heavier light than needed.

Bruce, thank you for the information.

I transitioned to a Jetbeam BC40 torch last year. Uses (2) 18650 cells and I think it’s rated at 860 lumens. Far cheaper that most the other brands so I was a bit skeptical ordering it but I’m glad I did. You can turn the bezel for two brightness options. Has a rear cap switch, and is waterproof to 3 meters I believe. I recharge every night anyway, but if needed I can get in 2-3 inspections on a single charge, and I also bring a spare set of batteries when I head out for the day just in case. I use a charger made by Pila since the chances of overcharging the battery are minimized with a higher quality charger. Torch was around $80, the 2 cells $15 and the charger $40 I think. Love it.

I’ve purchased about ten different LED Cree flashlights from Ebay over the past six years and they are all still going strong. The first ones were all single 18650 cells at about 400 lumens and they were a spotlight. A lot of throw but not much spread. I began to want a larger flood of light which I could use in lieu of my camera’s flash which had a hard time focusing in the dark or would have a washed out bright spot where the flashlight was shining.

I have moved to zoomable Cree LED flashlights and they are rated at 1600 and 2000 lumens respectively, which is necessary for the floodlight. The 1600 usually lasts for three 4-hour inspections, the 2000 lumen only lasts two inspections. I really love them in the attic, basement and crawl. The 2000 lumen uses a larger 26650 battery rated at 6000mAh, but can still use the 18650 cells with a collar insert. I posted photos below of some photos using only the flashlight in attics and a crawlspace. It has solved my photo frustrations where my attic photos always had that bright spot washed out.

Bruce, looks like a great flashlight for a fair price. Let me know. I could use 2 of the RC50

Bruce, looks like a great flashlight for a fair price. Let me know. I could use 2 of the RC50

ok, I sent you an email, thanks

I still have some RC40’s and RC 50’s left on this shipment but priority is given to those who have placed the order and paid.

These will be sent insured and they come with a battery and a 2 year warranty.

(I have responded to all emails, if you did not get one please check spam folder)

edit: Shipment just arrived, I will be getting the lights out sooner than I thought

For those that have lights coming, they should be there Saturday or monday.
I tested the lights before I shipped them too.

I still have some left and hope to be ordering another shipment soon, thanks!