I’ve never seen this type of setup. The drain was connected to the main in the basement and I have no idea why any of this would be in a bedroom closet. My client said he thinks it might have been for a film development station.

Any ideas about this? 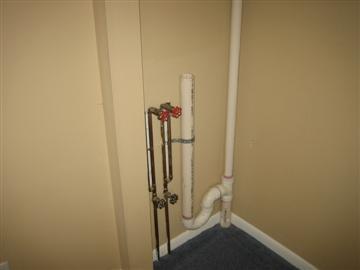 If the carpet was old were there any marks from equipment.
No 220 or gas line underneath right?
In other words no sign they could have run something through another hole.
Though we are all human and you may not have checked below , assuming unfinished ceiling below.
I have seen cases like this where they ran an extension plug to the basement if you follow.
Also that drain will start giving off gas when it dries up.

vince
It looks like a hook up for an upstairs washing machine conection to me , at least what i can see from that picture…could that be possible???..jim

Yep thats what I was thinking with the energy source from the basement and the rug covering the hole.
Empty drain should be capped.

The basement below had a finished ceiling so I couldn’t see directly under the plumbing line but I could see where it popped out about four feet away on it’s way to the main waste line. There were no signs of electricity or gas available to this area and the laundry tub etc. was in the basement. Another thing that was strange was there was a closet shelf about a foot or so up from the PVC end making it about four feet off the ground like it was used as a shelf for someone standing in that area working on something.

The agent thinks they used this area for developing film which would make sense that there are water lines and a drain available. The carpet was relatively new and had a few impressions on it like something square was in that area. I wonder if the impressions were from a tub used to soak the film in?

Leaves me scratching my head but either way I told my client the trap is no doubt dried up.