I just purchased a home with a recently installed radon mitigation system. The system vents through the basement and then upwards in a PVC pipe on the side of the house. The problem is that the vent terminates about 2/3rds of the way up, whereas my understanding is that according to EPA code it should extend at least a couple feet above the roof line to prevent re-entry of radon gas into the home. Note: I don’t have any windows or doors on this side of the house.

Do you guys think I need to bother the radon system installer to have the exhaust system fixed?

Here’s a photo of the system:

Looks like the installer met the 10ft horizontal to windows rule, but it **MUST **still rise above the roof plane at least 12 inches.

Note: exterior systems are generally frowned upon in cold climates (I see snow and weatherized hose bibb’s) from excessive condensation and load on externally mounted fans. Also note, the 45 degree angle fitting on the end of the vent piping which will exacerbate the problems by collecting rainwater and buildup of ice.

Yes… it needs to be corrected.

Jeffrey, thank you sir very much for your thoughts. I assume then that instead of a 45 degree vent it should be 90 degrees to keep water out?

I would agree with Jeff. I do a fair share of Radon work and see a ton of mitigation systems. The discharge pipe needs to extend past the roof line as Jeff mentioned.

Agree it needs correcting. I have attached EPA recommendations. 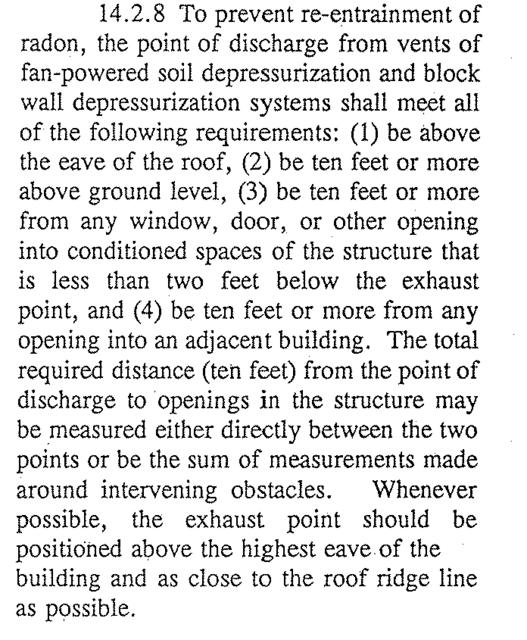 What appears to be the termination of a passive radon mitigation system in the attic space. This home is 3 years old, so always be looking for, to be short, (mistakes) of any sort. Directly above the venting of the mitigation was wet to the touch sheathing. More then likely from condensation created by the mitigation, but can not be absolutely sure.

Any thoughts please send them my way. 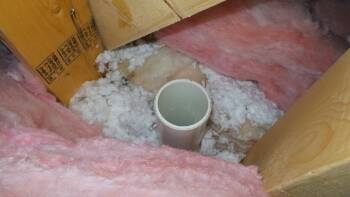 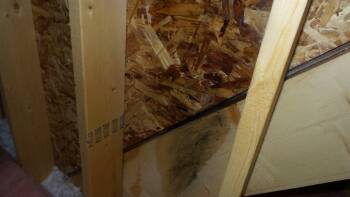 Appears to be or is a mit system? You have already described the defects. So call it out and move on. You need to be sure about what you are looking at though.

Very hard to tell from pics why the water is there. Did you find defects on the roof in that area? In my area we have some very tall attic spaces 10’ tall and taller. Now if I was in a tall attic space and that small area of water was 10 feet away from the mit system it would more than likely be a leak in the roof. Do you have any more pics showing the whole area?

That could possibly be piping for future mitigation system should one be needed. Only you will know since you were in the basement at one time. If it is for “future” use and not being utilized it should be capped at both ends. Good luck!

What appears to be the termination of a passive radon mitigation system in the attic space. This home is 3 years old, so always be looking for, to be short, (mistakes) of any sort. Directly above the venting of the mitigation was wet to the touch sheathing. More then likely from condensation created by the mitigation, but can not be absolutely sure.

Any thoughts please send them my way.

Where I live in Virginia, code require that radon system piping, ending below the roof, be installed in new construction for the past 6 years or so. It is provided so that when the HOMEOWNER has the house tested and it is in a range for radon remediation it is much simpler to deal with; just install a fan in the attic and punch a hole through the roof. It saves a lot of time and bother.

Where are you from Mike C?

Side vent is allowed in Canada but not in the US.