This is prep for a stucco patch job… it looks wrong to me. The woven wire is tight to the tar paper leaving no room for stucco to surround it. The staples pull out easily and look like they will rust. And the staples are in the sheathing not the framing. Am I too picky here?

The California Building Code says to use ASTM C1063. ASTM C1053 has notes:

*Table 3 Footnote: B (Woven Wire) Metal plaster bases shall be furred away from vertical supports or solid surfaces at least 1⁄4 in. Self-furring lath meets furring requirements.
*
Section 7.10.2.2 says ‘Staples shall have crowns not less than 3⁄4 in. (19.05 mm) and shall engage not less than three strands of lath and penetrate the wood framing members not less than 3⁄4 in.’

Cutting some slack for retrofit, what do you think? 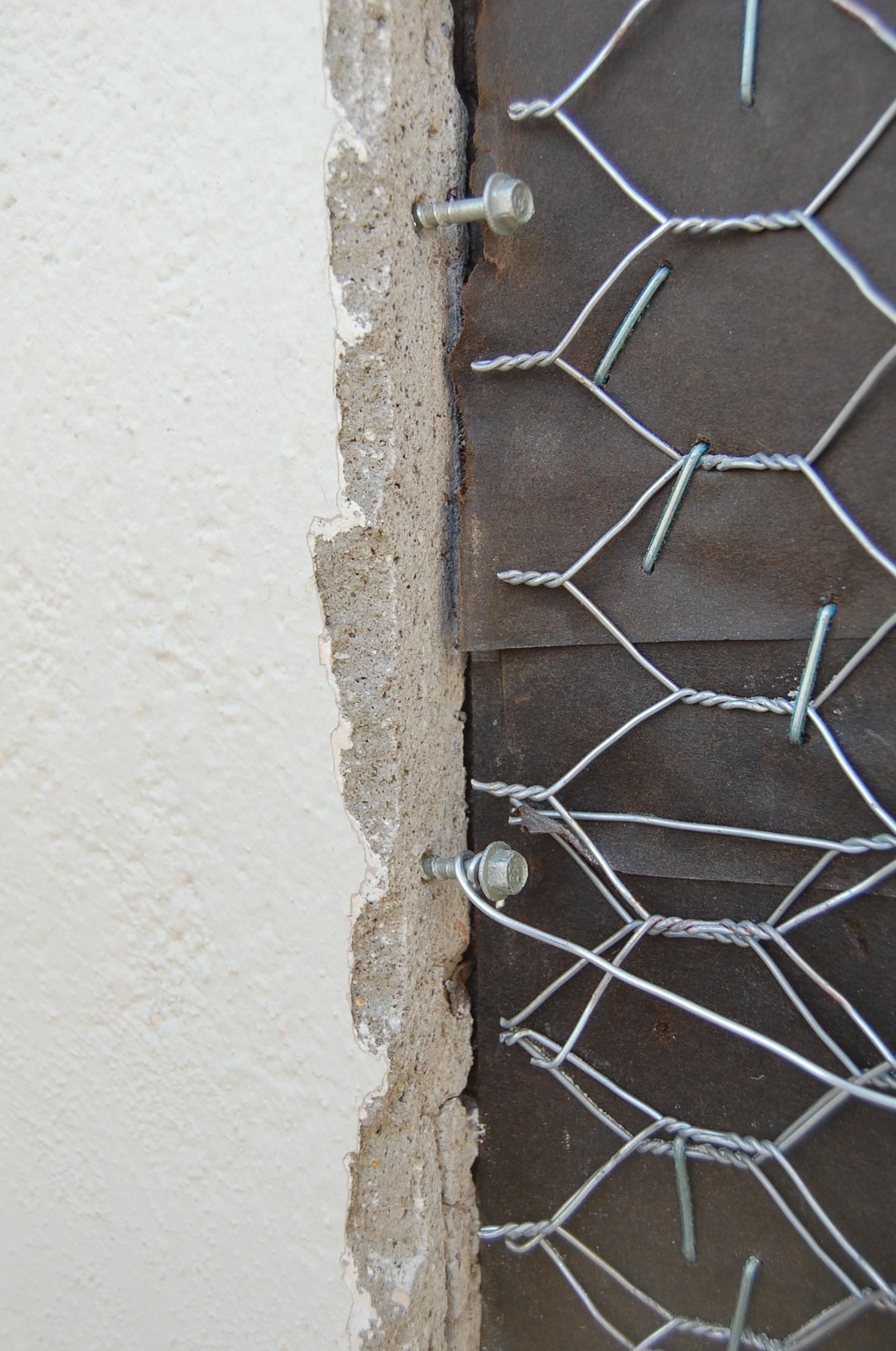 All wrong. If chicken wire is used they will need furring nails that have the spacer. The other choice is to use self furring lathe that has the dimples. Both keep the wire the required 1/4 inch space.

You got it. Six increasing zoom pictures at:
http://obviously.com/temp/StuccoPrepDetail/
Note in particular the tar paper curling out at the top edge of the patch.

The work is underway by a retried Union stuccoer… so making any suggestion something is wrong is very hard going. He has 30 years experience doing stucco.

Plus, the local building inspector passed this, so the code citation holds little weight (CBC 2510.3 specifies use of ASTM C 1063, which wants the 1/4" standoff, and the staples into the framing not the sheathing).

My opinion is he should have used the wire lath he used in the little spots everyware.

I have never used the chicken wire and do not see how it wold help hold the stucco in place???

Wire lath does have a top and bottom side and when installed top side up it helps hold the stucco in place. The small patches are patches and will definitely appear that way. Under the window may be ok but the hole patch should be stubnailed to the sides. It may work and MAY not crack but it may crack all around the circle hole.

Not the way I would do it.

He will surely have some good advice for ya.

Note: the wire lathe he used has no dimples.

The old stucco from 1950 obviously failed here. It was secured with roofing nails with the felt standoff into thin chicken wire. The wire rusted. The nails rusted. And the nails got loose.

Originally the building inspector wanted the stucco hammered to wire tie to the old chicken wire. But he conceded this was a fool’s errand after seeing this section: 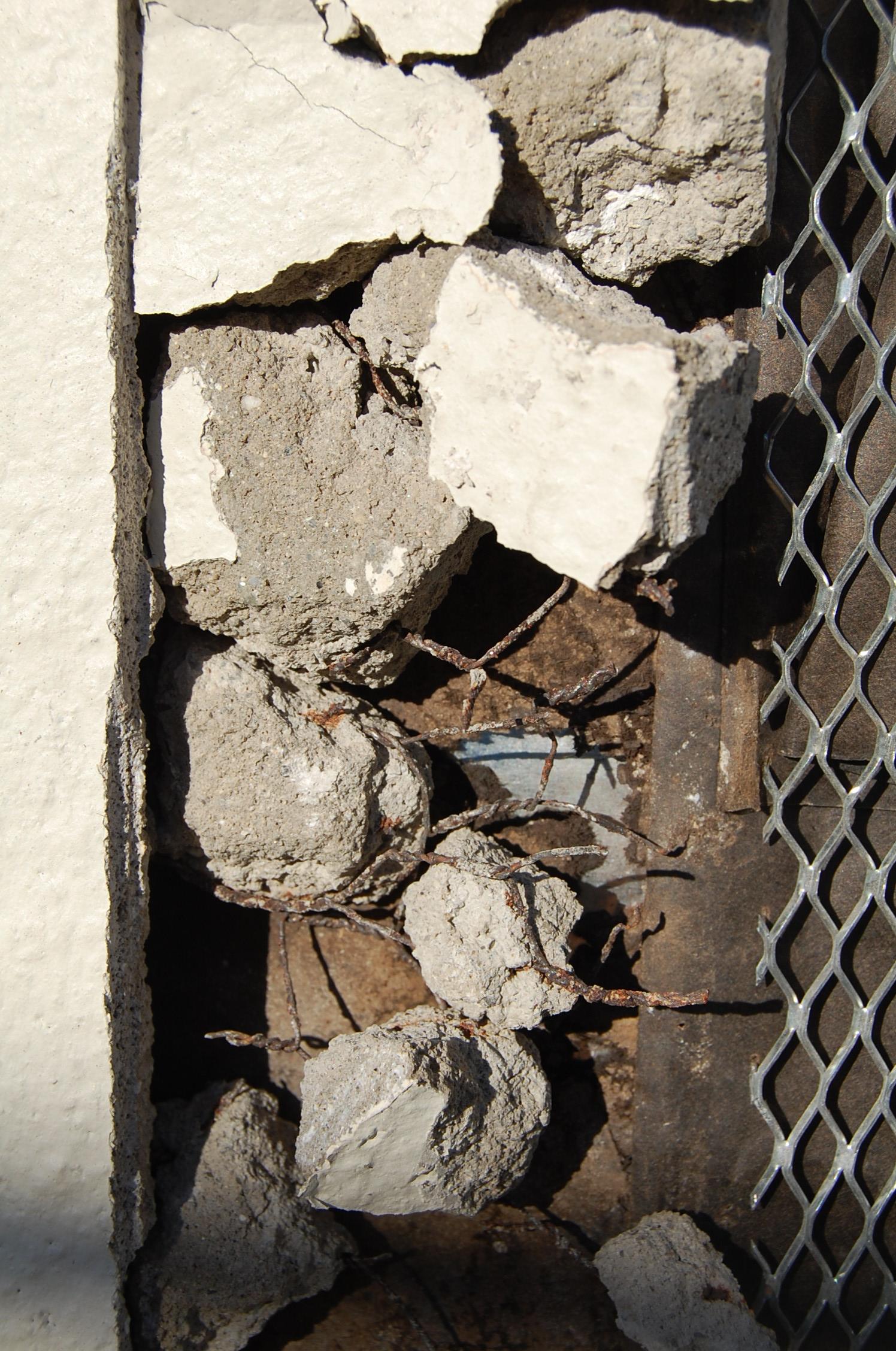 30 years of doing it wrong and was never taught or learned how to do it right.
Man oh Man, look at this diaster zone.
Even the extension ladder is backwards.

Carl needs to see this.

It has been said, it is wrong!

What about the under side of the windows where it will run water behind the paper instead of over it?

I bet the union was glad and sad to see such a craftsman leave!!!

To bad he is still messing up stucco jobs.

Sounds like he and the building (inspector) both need to be doing something else!!

Is it your house Bryce?

Yes, this is in fact my very own house. The above looked wrong to me, so I delved into the details of ASTM C1063. The conversation with the general was difficult, because the stucco guy has so much experience, and a track record of flawless jobs (even if he’s doing it ‘wrong’).

Though note: the ladder is not in fact backwards. The area under the window is clearly not done. My concern is the details of the seaming, stapling, lathe, and flashing.

(I visited the badstucco website, but the photos are currently broken, and the email link does not work)…

What way do you put lath on a cieling?

Once a tradesman/crafstman puts the mud on the wall or cieling the lath/chicken wire is nothing more than rebar on a smaller scale.

A lot of what the experts bark about is over rated IMHO anyway.

the H stands for Humble.

A good stucco job will stand the test of time, it is the FAUX materials and things done to a structure before the stucco contractor gets there that causes a lot of failures these days.

Let alone the DUMBING down of the AMERICAN workforce in all trades.

GREED is the real problem.

Now this might make him understand the moisture barrier problem!

To (try) and help this (stuccoer) understand the moisture barrier problem.

As for not over lapping the chicken wire on the exsisting.

Ask him if he ever got a cut that needed stiches and the Dr. only put them on one side of the cut then the other.

**Ok guys, it is fun bashing the inspector, the framer, and the stucco professional. And the video would be fun.
**

But what specific steps should actually be done to make this wall OK?

Was there ever any backer rod and sealnt joints around anything?

Like the windows as per most window mfgrs. specs.

The top has the effect the house needs to make it look right ever think about having flashing made to cover it?

Was there ever flashing on top of the windows?

Are they installing them the same way as they were so they will fail again?

How was the rot and other problems found?

How old is the house?

Was there ever any backer rod and sealnt joints around anything?

No, neither new nor windows old has backer rod or sealant.

The old windows just had stucco mold to the trim and flat unpainted sills.

The flashing on the new windows is properly done (for example the rough opening slants outward and has a layer of flashing on it).

The top has the effect the house needs to make it look right ever think about having flashing made to cover it?

I don’t understand the point you’ve made.

How old is the house?
How was the rot and other problems found?

The house was the site of non-disclosure by the selling Realtor (who handled the renovation). Here’s an example: note the brand new new 2x4’s and new door, on a wall that was then sealed caulked and painted shut: