There are more prisons in the U.S., than colleges

We imprison more of our citizens than any country in the world. Someone tell Lee Greenwood. He probably should rewrite those lyrics.

The problem is that A) Many are imprisoned for lesser offences, and B) Those that should be there permanently aren’t.

I agree, our incarnation rate is too high, but I’m not sure where you found your statistics unless you’re including local jails and juvenile corrections.

One of the reasons the incarceration rate is too high is we don’t execute those convicted of heinous crimes. Instead we support them for their entire remaining lives. The second reason is that we don’t make sentences harsh by working the prisoners. Essentially criminals get a free ride. If they knew they would get work sentences they would figure out pretty quick that it is easier to work for a living on the outside then work for room and board on the inside.

Anyone who tells you that the death penalty is not a deterrent is full of sh**t.

Brings up the interesting point that we never abolished slavery in this country, we just handed it over to the judicial system.

Section 1.
Neither slavery nor involuntary servitude, except as a punishment for crime whereof the party shall have been duly convicted, shall exist within the United States, or any place subject to their jurisdiction.

we never abolished slavery in this country, we just handed it over to the judicial system.

Not true. Slavery means OWNERSHIP. Incarceration and or involuntary servitude is a choice the inmate makes.

Well, I interpret this much differently.

Neither slavery nor involuntary servitude, except as a punishment for crime

Anyone who tells you that the death penalty is not a deterrent is full mf sh**t.

Statically, states with death penalty do no have lower crime or murder rates than states without. 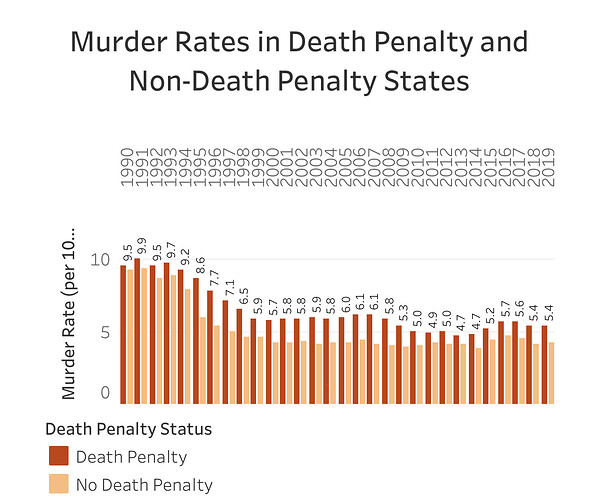 Statically, states with death penalty do no have lower crime or murder rates than states without.

That doesn’t mean anything. States vary greatly in population density, number and size of cities, poverty levels, income distribution, etc. Just a few of the factors that need to be considered in any statistical analysis of human behavior. Another junk statistic. An erroneous liberal “talking point.”

We imprison more of our citizens than any country in the world.

As a nation of laws, this makes sense. The freedom to choose to obey the law or to pay a penalty for disobeying the law is a protected right. In some countries of the world, prisons are not an option. Those who act unlawfully are thrown from the tops of buildings, beheaded, shot, or otherwise disposed of. Brutal, indeed, but it keeps the prison population at a minimum.

It is important to understand that the law does not distinguish right from wrong, but only what is lawful from what is unlawful. Stealing food to feed your starving family is unlawful, but not wrong. Killing an unborn human being is wrong but not always unlawful. Prisons exist as an alternative to other (and more dramatic) ways of removing people from a society they choose to live in but not to conform to its laws.

Questioning the existence of prisons and prisoners is equivalent to questioning a society’s right to set boundaries for behavior in a non-lethal manner, IMO.

Well, I interpret this much differently.

What prisoners currently doing time are OWNED by the state or federal government? That inmates lives are controlled by the government is no different from military service (probably more relaxed). The only difference is one is voluntary (even as alternative sentencing - a choice one makes) and one is not (“If you can’t do the time, don’t do the crime.”).

Stealing food to feed your starving family is unlawful, but not wrong.

A point to consider is that at one time (less than 100 years) major metropolitan areas had asylums. Both public and private these institutions housed and took care of the mentally and physically challenged as well as vagrant and indigent persons.

About 30-40 years ago a social change was made to no longer support or finance these living arrangements. Asylums were closed and the properties sold. Now we have tent cities of homeless and those that graduate to the prison population.

An additional consideration is how we handle immigration in this country. 100 years ago immigrants were a big business for steamship companies but were inspected and qualified at both ends of the journey. Immigrants who were declined entry to the US (for disease, criminal, no money, no resident family, no job skills, etc).were guaranteed return fare by the steamship company that originally transported them.

Now we have tent cities of homeless and those that graduate to the prison population.

Those statistics are meaningless for the reasons I mentioned and more.

I’ve heard it many times from liberals. It is one of their divisive “talking points” and you brought it up.

Lies, Damn Lies, and Statistics: The Manipulation of Public Opinion in America:...

Buy Lies, Damn Lies, and Statistics: The Manipulation of Public Opinion in America on Amazon.com ✓ FREE SHIPPING on qualified orders

In my opinion, most non-violent crimes can be and should be handled differently. Petty crimes often overburden the tax payer and leads to recidivism. Recidivism leads to homelessness and more crime.

Petty and non-violent crimes should be punished quickly without residual effects and without debilitating fines which leads to more recidivism. Community service, house arrest, weekend jail etc. are other options.

And many times they are. You have not accounted, however, for the repeat offender. Despite the non-violent nature of the crime and the leniency for early sentencing they continue to commit “petty” crimes. The question now becomes was the initial sentencing too lenient and or will more severe sentencing achieve a favorable result.

This question may be most easily answered by recognizing beforehand that each individual is different and sentencing merely based on the severity of a crime does not address this. Social and economic factors may contribute heavily to repeat offenses. A common immature attitude toward lenient sentencing is, “I got away with it!” In fact the current climate of no bail lenient sentencing has disturbingly missed the mark and made communities less safe and recidivism more prevalent.

Stealing food to feed your family is a crime, but most of the time, not wrong.

I was a big proponent of the death penalty until I became aware of how many times the prisoner was actually innocent.