Are they checked by the inspector during a home inspection?

PS: What do I have to do to get the actual picture of the start up video posted?

Joe,
I cant see the video because i am in a airport heading to a seminar ( Motorola Q)…but i will say home inspectors are probably not check garage doors for voltage because testing would generally require them to use a voltage meter…and it is usually not in there arsenal…some may but the majority wont…sad thing is the resistance to learning about suretests is only matched by the resistance to use of a good volt meter. ;(

I check aluminum siding but have never checked the garage door.

Would a non-contact (Tic-Tracker) detector likely have found this?

Would a non-contact (Tic-Tracker) detector likely have found this?

Tragic story all around.

There had to be several violations for this to happen. The ungrounded switch loop was only one of them. How was the garage door opener wired? (where did that power come from) Why didn’t that EGC clear the fault?

I agree the bottom line is they should have had permits and inspections but I am not convinced a lot of muni inspectors actually inspect anything. The EC is ultimately responsible and I imagine he will simply be bankrupted in a wrongful death suit. The wireman who actually killed this kid will probably get away scot free.

Are they checked by the inspector during a home inspection?

PS: What do I have to do to get the actual picture of the start up video posted?

Please note these facts in the video:

Thankfully I do not have a garage, but it’s just another reason why I like to DIY in the US.

At least you know the job will be done properly (else you do not do it at all).

In most other countries, a tragegy like this would never happen when one hires a licensed professional. Licensing means something and Governments enforce it aka Federal inspectors (why should safety be in the private sector?).

No permit. I cannot believe it.

A tragic illustration of Abernathy’s powerpoint that shows ground will not trip the breaker. I think it’s time to switch to three wire on the range.

This picture re-inforces the problems that can arise when the conduit is used to provide a ground path to a remote distribution panel. 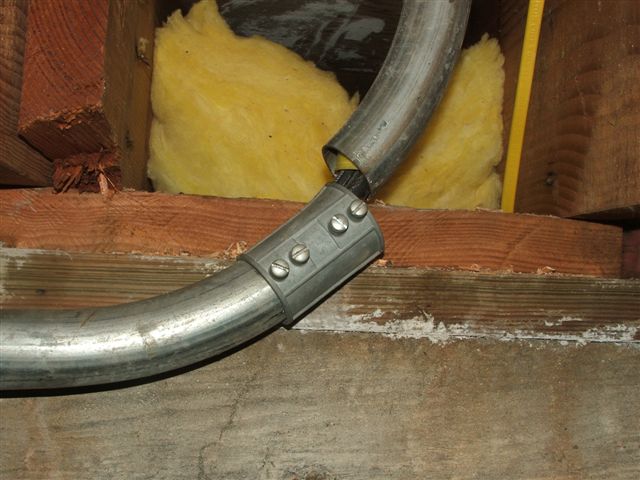 … and when the rust sets in this is the result!

All the examples above point out vividly the importance of installing a grounding conductor for all circuits. The additional cost is negligable when compared to the potential consequences.

Maybe I missed it, but in all the information presented, did anyone say exactly why and how the door itself became energized?

Poor reporting of a cause of death

This is a case where money will not solve the problem

Richard, you know that you need three insulated current carrying conductors to make a 3-way switch function. If you use a 2-wire cable for this you are forced to use the bare ground as a CCC. This will make the bare wire live under most conditions.
All that has to happen is for the bare wire to touch anything metal associated with the garage door. In fact, if there is no ground run to the garage the whole grounding conductor system of the garage wiring would be live and would have no way to trip a breaker. And NO, a ground rod would NOT solve this. All that would happen is voltage would be sent into the earth. There would not be nearly enough amperage to open a breaker.

That still doesn’t answer the question, how did they get the power to the garage door opener? Did it only work if the light was on? I suppose they might not have had an opener but I sure wouldn’t want to open my steel door without one.

At this time we only know that some A$$ used 14-2 in place of 14-3. This is wrong and should have the person’s electrical tools taken away for ever but this still does not explain the accident

Something else went wrong perhaps caused by the same person

In any case the press did not bring fourth the information

Too many non tec people messing with the facts

In any case inspect all that we can

I find it hard to believe a licensed sparky would sub 2 wire for a 3 wire circuit. Are we sure this wasn’t a DIY job? Or maybe a ‘jack’ of all trades type character? I am an electrician and myself and the guys I know take too much pride in our work to take a short cut like this. Sorry I can’t watch the video from where I am right now.