Call an HVAC Tech. or the Police?

Had one last week where they cut the refer lines.

About 8 weeks ago, phoned local chapter president at 9:30 am on a Monday morning. Asked him if he was busy on an inspection and could he talk for a few minutes. He said “I was busy for a few minutes but now I have time…there’s 2 police cars at the house.” House he was to inspect was vacant, thieves broke in during the weekend and stripped all copper plumbing out. Probably not more than 100 lbs in the house…all of $125 scrap. What’s the cost to re-plumb and repair/paint walls, etc…$6,000 (it was a smaller house) minimum…all for $125!!!

Yikes. It would take hours to take all that out too. They could have gotten a real job and made just as much.

Since most of my inspections are foreclosures or REO’s, this is likely what I see everytime. 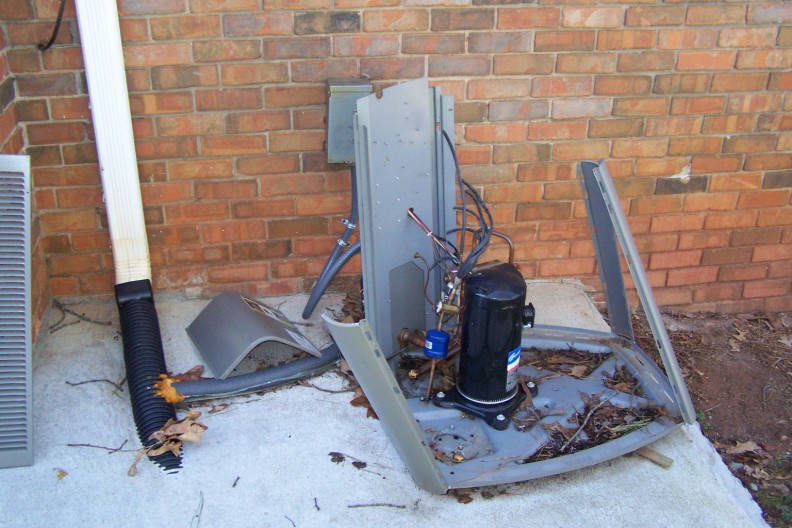 Brian,
Mine this morning looked just like the pic you posted except the compressor was gone as well, the only thing left of what looked to be about a 2.5 ton package unit was the cabinet, and it was in pieces. I have a nice pic but it’s too large to post here.

FYI #1 copper scrap runs about $2.75 lb. It varies daily like a stock market listing. Here in central Indiana the scrap yard logs who brings in what. Some of them have police on site checking what comes in. We had a food pantry for low income lose $200,000 in perishable food when they stole the coolant lines over a long holiday weekend.

We had a food pantry for low income lose $200,000 in perishable food when they stole the coolant lines over a long holiday weekend.

Man, That’s a shame. Here in Nashville, Tn the Police are putting some pressure on the scrap yards’ also. The Police want the buyers’ to I.D., finger print and take a photo of the seller. That’s about the only way to combat this problem.

When the economy turns down some more , you may need to start guarding downspouts again

I talked to a local scrap guy in my area and he told me the authorities visit him on a regular basis.
Says he doesn’t accept suspicious scrap.

I thought that was vegas

All the money you take to Vegas…stays in Vegas.

Yeah, but have you seen the price of copper recently? I almost had a heart attack when I went to buy 5 feet of 3/4" copper pipe at the weekend.

The third biggest reported crime, in my area, is stealing the A/C compressor. Just clip 2 lines and the electrical and walk away with a $3,000 item.

I have been seeing this more and more.

Did one, the other day. 4,900 SF that has been sitting vacant for about 3 months. Viking stove, Sub-Zero fridge, marble and cherry cabinets. 3 75 gallon forced draft water heaters, 3 compressors and three furnaces.

Some advice. If you are going to steal something, steal it from the rich neighborhoods :mrgreen: