In the late 50’s and especially in the 60’s there were many homes built with Brat Grills (indoor BBQ’s) in basements around here. As one can imagine, they were mostly fired with Charcoal which is an excellent way to suck the oxygen out of a home. Even more so, none have an external air intake and many of the old basement windows have been converted from wood or aluminum hopper to glass block without vents.

What would be some of your suggestions for commenting on an item like this in your report that you would present to your client? I did a search for “indoor bbq” but nothing came up.

Thanks for your help!

I’ve never seen anything like that. We cook our squirrels outside down here.

There is a flue on it, right? However, provided it has a flue, I don’t see much difference between it and a fireplace. I don’t think an air intake is an issue on an older home like what you describe. But the door does not opens over a hearth, which is a concern for me.

I would probably simply say it is old, unconventional and beyond my expertise and refer it to a fireplace specialist.

The hearth depth stands out like a soar thumb.

The following is on my inspection reports…

Is there a brand name on those, anywhere?

No, there are no model numbers. They are custom built and there is a separate flue that usually is combined in the chimney with the furnace flue. I’m just curious about burning charcoal inside the dwelling since every bag of charcoal states not to do that.

I have not found anyone to use them, but there are plenty around here.

No different than a wood fired IMHO.

As for the charcoal bag warning, it’s a lawyer label for idiots that might want to use their Weber inside.

No different than a wood fired IMHO.

Its a little different… If you are using natural charcoal it isn’t, but the briquettes have some additional things added to them…coal, petroleum (as starter), and other things besides wood. I don’t know if that has anything to do with it or not, but I wouldn’t put kingsford in my fireplace.

I guess you’ve also got the possibility of the idiot using a whole can of lighter fluid and torching the whole basement. :mrgreen:

Are you sure these things are not properly referred to as a Dutch Oven? Used for cooking bread?

**A Quick Course on Dutch Ovens
**

I used the wrong word. (But I didn’t know a Dutch oven was just a pot!).

I was thinking more along these lines…a brick oven. I think it should be referred to as an oven, instead of an indoor BBQ, regardless. 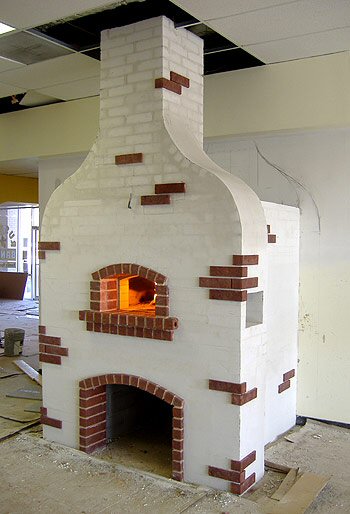 I used the wrong word. (But I didn’t know a Dutch oven was just a pot!).

I was thinking more along these lines…a brick oven. I think it should be referred to as an oven, instead of an indoor BBQ, regardless.

Now this is cool, and this is absolutely something I would love to have in my home. Can you image the flavor of the bread or pizza you could make! Mmmmm. Yummy!