Shoud this Quick Disconnect have an inside cover? 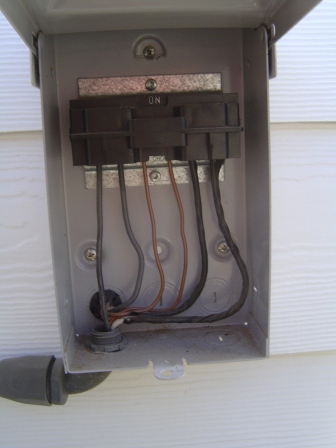 I don’t see any exposed live parts. Did you?

If it were at my house it would…or a lock if I couldn’t find one to fit. It looks like it was designed to have one…

I have not seen any of this type without a second inside cover. I thought it was required. 2 quick disconnects at this townhouse are like this. Would you call it out as a defect?

It appears that someone is holding up the outside cover, that should be locked so kids couldn’t mess with it and someone in charge should have the key. You say that another unit has the same type of box, but beyond that one did any others have an additional inside cover? I would just suggest that it should be locked.

Would you call it out as a defect?

I would based on the fact that I do not see a fitting being used where the wires exit the enclosure at the bottom rear. The cover may or may not be needed but I don’t recognize this particular model of enclosure.

There is an NM connector at the back. I thought the same as you Michael then I realized what it was. It is one of those black plastic button types.

If there are no exposed live parts when the pull out is removed then it is a legal item without an inside cover, IF it is listed this way. You can’t simply say it “should” have a cover if the enclosure was not designed to have one simply because you “think” it should be there.
I know this can be a trick call.

That said, I have not seen one like this either. Then again, all the ones I have seen and used DID have live parts exposed with the inner cover removed.
I cannot see any evidence that an inner cover is used on this one. I see no tabs or hooks to guide an inner cover in place.
IMO it looks legal.

There is an NM connector at the back. I thought the same as you Michael then I realized what it was. It is one of those black plastic button types.

Thanks for chiming in here Peter.

I could not see it for sure when I enlarged the picture but I wil ltake your word for it.
I sometimes copy the picture here and enlarge in in my photo editor for a beter view. Our BB limits file size for the photos so we don’t get enough detail sometimes.

I think I see here but not sure.

It appears that someone is holding up the outside cover, that should be locked so kids couldn’t mess with it and someone in charge should have the key. You say that another unit has the same type of box, but beyond that one did any others have an additional inside cover? I would just suggest that it should be locked.

It wouldn’t be much use as a quick disconnect if it was locked!

Joe, I hear you, but around my area kids have to touch EVERYTHING, I would rather see it locked with a notation on the cover in black marker “key at office” (or who ever has it.) than see somebody get hurt. Remember in case of an emergency firefighters always have bolt cutters on the trucks. just my opinion.

The purpose of a dead front cover is to keep someone from contacting live parts. If the HVAC system is being serviced and nobody is home or the key can’t be found, the worker’s life is potentially in danger if there is no way to cut the power quickly.

I don’t know whether or not the device requires a dead front cover (I’ve seen them that way also and have not called them out if I can’t see live parts). But I feel like the service people have to be protected also and locking the thing prevents that. I suppose the next question is “why then is there a lock ring on it?” That I don’t know.

1.) Most of the time we place tie wraps on the disconnects, the concept here is that IF if happens to blow then it will get service regardless from the homeowner or service tech and they will have no problem accessing it.

The NEC is very clear ( the minimum safety standard ) that it can be locked if you so choose so it is really a preference as the issue is does it require a cover on the inside.

well I have to say honestly, the ones I deal with always have covers…from manards to some of the lower cost brands I have been getting from SunStar in Florida…but from looking at this picture I do not see any live parts exposed while in use.

Now could a child come and mess with it, sure they could which is why it is perfectly fine to lock it…nothing against it and if a service person HAS to get to it…they know how to get it open so most of the time a tie wrap is what most will use…keeps it close, a kid looses interest because they are a tough thing to crack without cutters…

1.) I dont see any live parts exposed, and if in order to EXPOSE those live parts means dismantling the switch front…then well…so be it.

2.) People fall down stairs all the time in homes even with a rail present, they just dont always use common sense and kids never use it.

Yep…serves two GOODS in this case…keeps people and kids out and service people have no problem cutting off the tie wrap.

Simply fix and makes everyone happy…

Seeing any of the air conditioner disconnects in the field yet that also have a duplex GFCI receptacle inside the disconnect? These are new out in the last few years.

Double check the insides of these combination air conditioner disconnect/ GFCI’s. Some HVAC installers are putting these in, and tapping that GFCI off one hot wire that serves the AC and the GROUND WIRE! Not only will the receptacle be sorely overfused, but that is an improper use of the equipment grounding conductor. Big hazard. Keep your eyes peeled.

I don’t understand the quickly part of needing to turn off power. This is a safety device to isolate the 240v power from the unit before servicing it. I know of nobody who can outdraw electricity and pull a disconnect before the circuit completes through ones self. That tech needs to have 240v GFCI breakers on the units he’s servicing.

That is incorrect, the disconnect to the outside AC unit does not need to be 1.) GFCI protected and 2.) does not have to be fused or circuit breakered at the location of the unit outside…however it does have to be able to be disconnected for service…which is done my a standard non-fused pull-out.

The OCPD is located back at the distribution panel and will serve the purpose needed for being that QUICK DRAW for the electical current.

Now it is very common to lock out a disconnect and it fine…again tie wrap is used most commonly in my area.