Anyone ever seen this before? No leaks on interior walls just at the exterior. Owner says he saw it only after the freeze. I’m thinking the spigots line behind the brick. 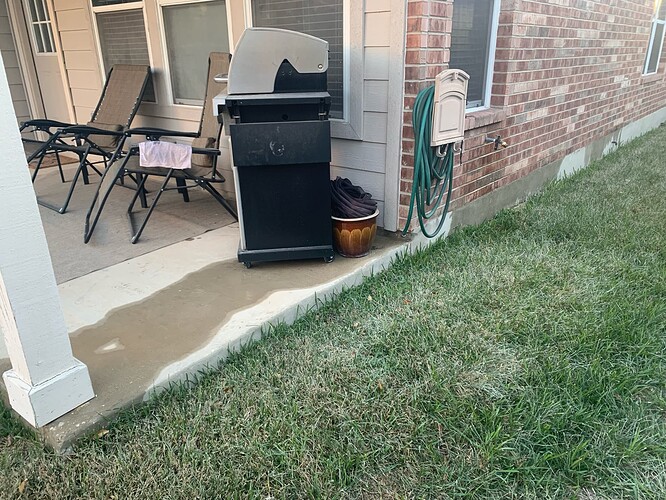 Spigot itself could be cracked leading to exterior leaking. I’ve seen the same issue w/o internal intrusion…

What is on that side of the wall? Kitchen, bath? Yes, could easily be the spigot, shut the water off to it and see if the meter is still spinning.

Sorry about that. Duh should’ve mentioned it. The inside of these walls is a spacious living room. No plumbing on the interior these walls.

Looks like a pipe burst from here in GA. Simon’s on point. I foresee a call to a plumber.

No leaks on interior walls

Not yet at least…

That is not a proper freeze proof hose faucet, so frozen pipe just there at the brick is my thought.

The OP appears to be in San Antonio, TX. Here in North Texas Winter design temps are set at 32 Degrees and we always see improper hose bibbs installed or improperly installed. See it so much I have a canned phrase in every report template for them.

I’m in an area where we see very few no-freeze faucets used. (St George UT). We have palm trees yes, but it does freeze. I have an outside faucet that will freeze and will discharge water from a time similar to what you see in the OP pic. I normally will put the foam faucet covers over them and that usually will do the trick. I forgot to do this and had this exact thing happen a couple days ago. I’d say only about 50% of the homes in my area have no-freeze type spigots. I call them out with a generic canned statement to advice that they need to be aware and protect as needed.

Anyone ever seen this before?

Yes. Weeping.
Shortly after I inspected a flip my client called me to say I missed something. He assumed I missed a leaking supply plumbing pipe in the kitchen, and asked would I mind dropping by to take a look.
I went to the home to see masonry veneer walls weep. That’s what masonry veneer walls do to disperse condensate from within the midwall assembly.

That’s what masonry veneer walls do to disperse condensate from within the midwall assembly.

In looking at the photo closer, I don’t see any weep holes, weep vents or thru wall flashing. I doubt that is “condensation” coming out of the wall and I suspect that it’s more likely to be a burst pipe. Of course we all don’t know what the source of the moisture until a little invasive probing behind the wall is performed. I’d much rather recommend a plumber to eliminate the possibility of a burst pipe then to recommend a masonry contractor.

In looking at the photo closer, I don’t see any weep holes

Oscar should have been vigilant and looked for weep holes.

I do not concur with your observation, and will say this, how could water travel along just the brick shelf for ><15’ feet.
I found 3 posible weep holes. 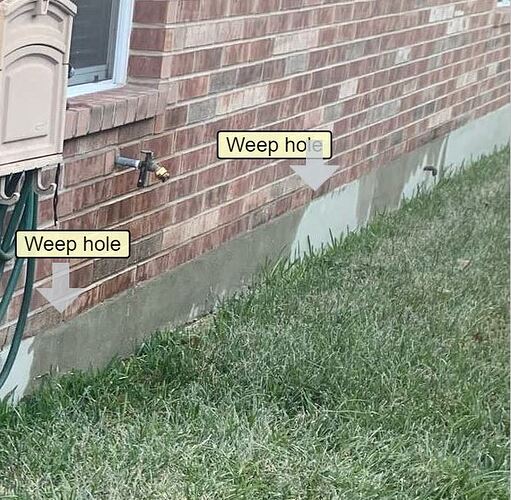 The wet concrete on the landing under the hose.
The hose is detached. Not hooked up to the hose bib/spigot. So unless siphonage took place at the lowest point and happened directly after the hose was detached from the spigot, after the hose detached after being used I find that theory hard to digest.
As well, a sensible homeowner would notice any spray issues at the hose bib connection when the water is turned on. You get sprayed!

1: This appears a newer building likely energy efficient.
A: Flashing is required. Just because you can not see it does not mean it is not there.
B: Just like WRB or Weather Resistive Barrier, House Wrap, is behind the siding, flashing is there atop the foundation shelf.

I am not saying it can not happen bt I operated hose bibs a good part of 40 years. The leak occurs at the hose connection. The last thing you want is to be sprayed by water when it is cold.
Owner says he saw it only after the freeze. That make perfect sense. Dew point conditions were there, there was frost.
From the Weather Almanac: As a rule of thumb, don’t worry about a frost if the dew point (the temperature at which the air is no longer able to ‘hold’ all the moisture within it) is above 45°F on the evening weather report .

it’s more likely to be a burst pipe.

Plumbing Pipes, both supply and waste water, are not allowed to be run on exterior walls. If a pipe leaked, it would be visible from the interior.

If a pipe burst, the family would require a canoe to get to an egress in the basement and the insurance company would be notified I suspect.

If a pipe leaked, it would be visible from the interior.
Not necessarily, if the leak is from the exterior side of the sheathing (between sheathing and brick), the moisture may not work its way back through the wall cavity.

Right now we are all speculating. You could be correct, or it could be a burst pipe. Who knows? I still think from a homeowner standpoint, it would make more sense to rule out plumbing than to bring in a mason.

It would be great if the OP would could find out from the owner the source of the moisture and share in this forum then we all could learn from this.

Oscar should have been vigilant and looked for weep holes.
I stand corrected. I see the weep hole to the left of the hose bib, the one to the right is hard for me to see from PA.

If a pipe leaked, it would be visible from the interior.
Not necessarily, if the leak is from the exterior side of the sheathing (between sheathing and brick), the moisture may not work its way back through the wall cavity.

You are exactly right! … This event has nothing to do with condensation behind the brick in the drain plane IMO.

From Ohio I can see that the hose bib is impropertly installed.

When you zoom in on the hose bib it looks like galvanized steel (from my computer anyway) was installed. This appears to be a newer house so why the steel? Homeowner repair?

Plumbing Pipes, both supply and waste water, are not allowed to be run on exterior walls.

Depends on the jurisdiction. We run water lines on the exterior walls here.

In the United States drain lines are installed on exterior walls regardless of what state you live in. I assume that’s what you meant by waste water, I never heard that before.